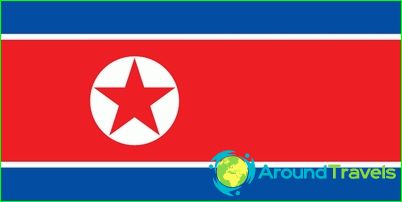 Description and proportions of the flag of North Korea

Flag of North Korea isClassic rectangle whose sides are to each other as 2: 1. The flag looks like a box, lined with five unequal to each other by strips. The most wide - the average of the flag - made of bright red. At its closest to the shaft half coated white disc, which is inscribed in five-pointed star of the same red color as the main field of the flag. The edges of the stars touch the edges of the white circle.
Red box is limited to thin stripes of white, followed by the upper and lower bands of the flag of North Korea. These extreme top and bottom strip made dark blue.
The symbolism of the flag State, North Koreaunderstand each of its inhabitants. The star is a symbol of the revolutionary traditions of the state, which is based on the Juche idea. This official ideology recognizes as a basic postulate of 'reliance on their strength. "
The red field of the North Korean flag recallsrevolutionary patriotism of the inhabitants of the country and the spirit of struggle, which permeated every day of their lives. The white stripes of the flag of North Korea is traditional for this people. It symbolizes the purity of ideals and thoughts of every Korean. The blue field of the flag - a desire to unite in the struggle for the victory of peace and friendship with all the revolutionary peoples of the world.

Immediately after the end of World War IIThe Korean peninsula has become the scene of the liberation struggle against the Japanese invaders. During these years, the people of Korea used the flag of pre-colonial state, which was called the Flag of Great Beginnings. It was a white flag with the emblem in the center. This character of higher harmony and perfect world devices recalled the unity and struggle began yin and yang concept of eternal progress. Flag Trigrams meant the most important for people to values ​​and qualities of an ideal nature, the seasons and the heavenly bodies.
In 1948 the flag was officially started the Greatproclaimed a state symbol of the newly formed Republic of Korea in the southern part of the peninsula. North Korean authorities have been forced to develop a project of their own flag, which was hoisted for the first time on all the flagpoles in September 1948.