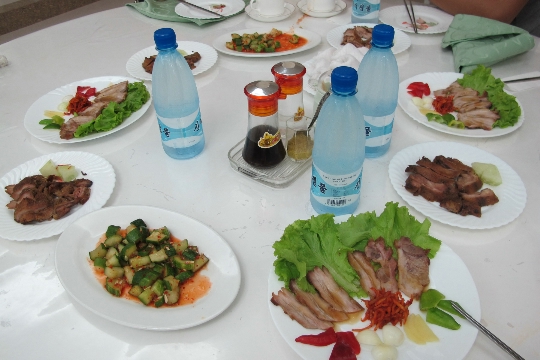 Kitchen of North Korea is virtually identical to the South Korean cuisine, and is a reflection of the gastronomic elements of neighboring countries.

Central to Korean cooking takesFigure he prepares crumbly izhidkim viscous and in the preparation of other products can be added to it. In addition to rice widespread legumes received in North Korea (soybeans, mung beans, kidney beans adzyki). Thus, soy comes in handy for making tofu, it sprouts often fried in oil, and on the basis of fermented soy milk prepared spices and various sauces. It is worth noting that for rice and main courses are often served banchan - a variety of salads and snacks in small saucers (mostly salted, boiled, pickled or grilled vegetables with spices).

No meal is complete without a nomination onBuffet kimchi (their base - pickled cabbage) are kimchi with garlic, onion, pepper isedobnymi herbs, with radish, fruit and even salted clams. To give a special flavor to some bland dishes, in North Korea, they are supplemented with soy sauce or beef broth based on spices, herbs, greens and vegetables.

Where to try Korean cuisine?

Going to a local restaurant, you can be sure that you will be served dinner something complex - ie, in addition to the main dish on your table will be soup, rice and kimchi.

Everywhere tip common, although they are not officially encouraged, but you can thank the staff a small monetary compensation (5-10% of the total bill), if desired.

In Pyongyang, to stave off hunger, you can visitRestaurant "National", where guests are treated to Korean dishes and local beer (entertainment is presented nightly performances of traditional music bands).

The gastronomic journey through North Koreaoffers start with a visit to Pyongyang restaurants - for those wishing to conduct master classes on cooking Korean dishes, followed by a repetition of an independent action for the chef and tasting prepared in friendly company.

To visit North Korea can be found such an exciting occasion, as taking part in the Festival of Culinary Art (April, Pyongyang).