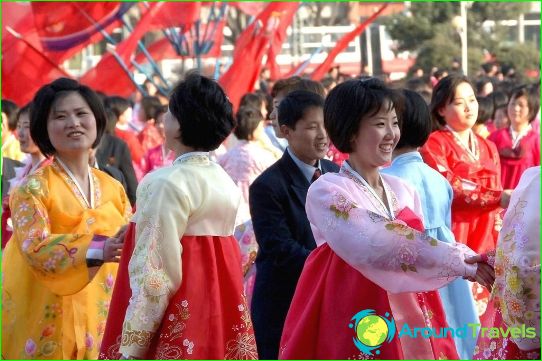 North Korea has a population of more than 24 million people.

Initially, the Korean peninsula was inhabited by Tungusic peoples who came here from the north-western parts of Asia.

The population of North Korea is subdivided into multiple groups (depending on their origin) which form three layers:

On the 1 sq km is home to 195 people, but the most densely populated are western coastal areas.

Despite the relatively good performance,State allocates for health care 3% of GDP, and many hospitals and clinics lack of highly qualified doctors, medicines and equipment. The main problems faced by the people of North Korea - malnutrition, tuberculosis, pneumonia.

Since the country's health system is very poorly developed, there is widespread traditional medicine (acupuncture, ginseng in capsules, teas and tinctures, massage, leeches).

Traditions and customs of the inhabitants of North Korea

In Korean society strongly influenced by traditional family values: Koreans are respectful to their parents and the elderly, they worship power and justice.

All spheres of life are based on Korean systemcommunities and hierarchies. For example, village elders are endowed with no less authority than the people in leadership positions in the local cells of the WPK, and war and labor veterans immediately released from many household jobs.

As for food, the meal can begin only after it will do the most senior in age, and as soon as it comes out from the table, the others must do the same.

We decided to visit North Korea? Do not be surprised if a Korean, you have pushed or stepped on your foot on the street, quietly pass by without apologizing. This is not a sign of disrespect to the man, and the reluctance to bring him uncomfortable (not that he apologized to retaliatory offender, which would bring him an apology).