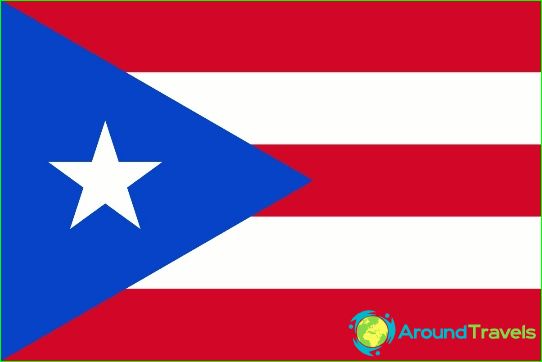 The national flag of freely associated state of Puerto Rico approved in July 1952. It was then that the country received the status of associated territory and adopted a constitution.

Description and proportions of the flag of Puerto Rico

Flag of Puerto Rico represents the panelclassical quadrangular shape, the length of which refers to the width in the proportion of 3: 2. The main field of the Puerto Rican flag is the equivalent of five horizontal bands of width. In Puerto Rico flag - three bright red and two white stripes. Extreme are the top and bottom red. From a staff of Puerto Rico flag in his field cuts isosceles triangle of bright blue, the center of which is applied five-pointed white star.
Flag of Puerto Rico can be used by citizens andstate institutions on land and private and public vessels on the water, as a sales opportunity. Drawing of the flag of Puerto Rico approved by the authorities of the State, but not officially adopted.
Unlike the bulk of State, the coat of armswhich repeats the motif or color of the flag, the coat of arms of Puerto Rico has a completely different look than the flag. It granted the country the Spanish monarchy, and it is the emblem of the first in the New World.
In Puerto Rico coat of arms depicts a white lamb togreen background applied to the shield. Lamb sits on the book of Revelation, and the frame heraldic shield coat of arms with flags of different Spanish kingdoms and royal families.

This current Puerto Rican flag was createdat the end of the XIX century. He comes from a Cuban flag, and its activists used a revolutionary party, which led the struggle for liberation from Spanish rule.
US victory in the war with Spain led to the landing of American troops on the island, and since 1899 the flag of Puerto Rico become the official star-striped flag States.
As such, the system of state symbolsPuerto Rico lasted until 1952, after which was approved today an option flag. It is recognized not only the state, but also the national flag of Puerto Rico and just hung out, accompanied by flag States. This is because the area of ​​the island has the status of an associate, but its political status up to the end has not yet been determined.