Home>Articles about South Korea>Articles on Seoul>Airport in Seoul: a diagram photo. How to get to Seoul airport

Airport in Seoul: a diagram photo. How to get to Seoul airport 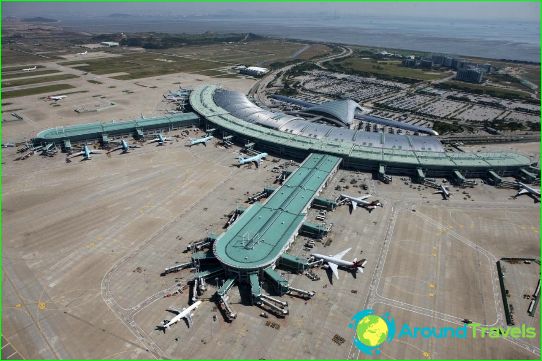 Incheon Airport, located about 70 kmfrom the city of Seoul, it is the largest international airport in South Korea. After opening in 2001, he immediately took over most of the international air transportation Gimpo Airport.

In its short history the airport in Seoul managed toto win a number of awards. Every year, since 2005, recognized as the best airport in the world by the International Union airports. Incheon Airport also received the highest rating every year according to the research company SkyTrax. According to the same company, in 2009, the airport for the first time became the leader in the ranking, beating all of its global competitors.

Airport in Seoul is very attentive toits passengers and offers a number of important and useful services. Among the free services it is worth noting a special room for rest, shower and access to the Internet.
For paid services include - cafes and restaurants serving different cuisines, hotel by the hour, shops, etc.
A significant advantage is that all the information at the airport duplicated in English - it's much easier for passengers to obtain the necessary information.

Seoul Airport has two terminals - the main andTerminal A. The main terminal serves flights of only two airlines - Korean Air and Asiana Airlines. The terminal A are serviced by all foreign companies.
The terminals are connected by an underground communication with automatic transit passengers.
It is worth noting that all the registration procedures on the flight of foreign airline passengers must go to the main terminal, and then get to the terminal A.

It can be reached in several ways from the airport to the city: