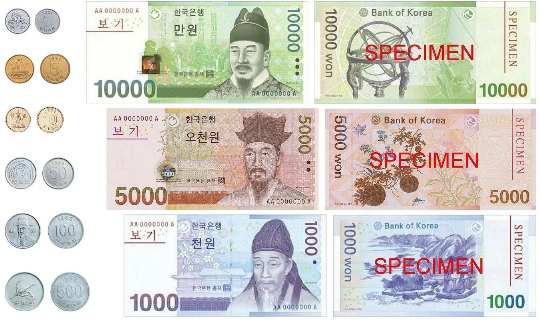 In South Korea, the official currency is Won anddenoted KRW digital code 410. Money in South Korea traded in the form of coins and banknotes. The handle has a constant value of coins 10, 50, 100 and 500 won, and the paper money denominations of 1,000, 5,000 and 10,000 won.
Also popular are bank checks from 100 thousand wonand higher. If you want to pay by them, remember that in the back of the check, you will need to specify some details of your passport, the official place of residence and the local phone number, so if you do not have a residence permit, this option is not acceptable for you.

What currency to take to South Korea

Almost the entire territory of South Koreause - bank credit cards. The most popular of them: Visa, American Express, Diners Club, Master Card and JCB. Many services can be paid for it with a credit card, you can also withdraw cash at ATMs, which is South Korea's enough.
It is much easier to exchange in South Korea to holdin US dollars. Therefore, the logical answer to the question "What currency to take to South Korea" will be - the US dollar. Although large exchange points, taken any, demand, monetary currency. In addition to the specialized exchange offices, money exchange possible in airports, banks, some hotels, etc.

Customs rules adopted in South Koreaallowed to import any amount of foreign currency rating. Currency in the amount of more than $ 10,000 or the equivalent in the currency of other countries, should certainly declare. Monetary denominations of exceeding that amount, and not specified in the customs declaration shall be confiscated and the offender will be fined without fail.
The export of foreign currency funds mustbe equal to, the amount of imported (when importing from $ 10,000), with a smaller amount - taking money free. Export and import of local currency is allowed in the amount of not more than 8 million won.
Leaving the country, it has the opportunity to exchangeunused currency, but only in the presence of a local bank certificate confirming the operation. In his absence, it will be exchanged no more than US $ 100. So be careful with the documents confirming the transaction on the exchange. This will help to avoid trouble at the end of vacation.

Holidays in Greece in July: the prices and ...