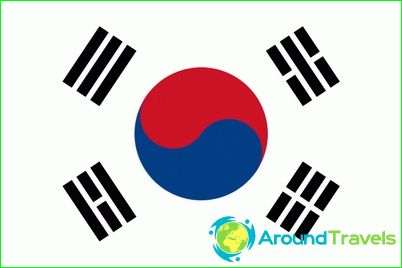 The flag of the Republic of Korea is easily recognizable from manyothers. It is a rectangle whose width is proportional to its length in a ratio of 2: 3. On a white background depicts the flag and emblem of the central trigrams. The white color of the flag of South Korea - a country's national color. In Buddhism, the white color is considered to be the mother and represents holiness and chastity, self-control and his own thoughts.

The central emblem of the South Korean flag representsviews of its inhabitants to the device of the universe. It is represented by the union of energy "yin" and "yang", which interact together. "Yin" energy represented by the symbol of the blue, and the "yang" - red. But Korean "great beginning of the yin and yang of" sound like "thegyk" because the flag was called Taegeukgi. Two forces, pictured together, are designed to embody the idea of ​​continuous movement, to achieve harmony and maintain balance. They characterize the infinite in all its manifestations.

For the first time the flag of the Great began to appear in 1883. He served as a national symbol of Joseon Dynasty, Korea's ruling since the end of the XIV century. Its founder Taejo of Joseon became famous for his struggle with the Japanese corsairs, made devastating raids on the Korean peninsula. The flag of Joseon were first applied trigrams, which are located closer to the corners of the modern flag of South Korea.

Trigrams also consist of "yin" and characters"Yang", which correspond to the intermittent and continuous strips. Trigrams on the modern flag means a lot, it is important from the point of view of Taoism, the concept. If you read from the top of the shaft and move clockwise trigrams symbolize the sky, moon, earth and sun. Another of their value - south, west, north and east. Symbols indicate vysheoboznachennyh in the manner and on the time of year - summer, autumn, winter and spring. And finally, they correspond to the elements - air, water, earth and fire. Black color, which made trigram flag symbolizes Koreans resistance, vigilance and justice.

Flag of South Korea, was approved in 1948year. Its author is considered to Lee Eun Jung, who is credited with the creation in 1882 of the original Taegeukgi. This man served as an interpreter at the court of His Majesty the Emperor of Joseon. Then the original flag was in the status of the state until 1910. After nearly four decades, he returned to the country all the flagpoles.