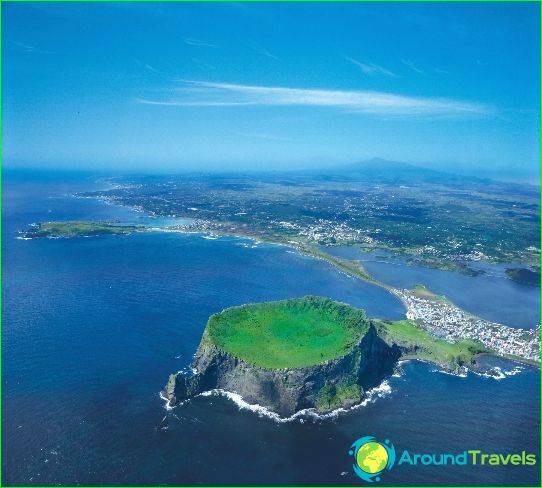 The southern part of the Korean Peninsula takesThe Republic of Korea. The country is in Asia and is bordered by North Korea. In her tenure also includes the islands located near the Korean peninsula. In the west of the state washed by the waters of the Yellow Sea in the east - Japan. In the south it has access to the Korean Strait. Island South Korea - more than three thousand coastal land areas.

The biggest island is in JejuKorea Strait. He is regarded as the smallest province of Korea. The administrative center of the island stands the city of Jeju. The island is characterized by volcanic origin. In it there is the highest point in South Korea -. Hallasan volcano, which reaches 1950 m Jeju is the result of a volcanic eruption that occurred in ancient times. Therefore, it is formed mainly of basalt and lava. The nature of this island is considered to be unique and is protected by UNESCO. On Jeju possible a great beach vacation. There are wonderful beaches, clean sea and beautiful tropical landscapes.

The natural features of the islands

In South Korea has a mountainous terrain. Therefore, in the country there are many ski resorts. In spite of the relief features, this region is not a dangerous earthquake. In Korea, not earthquakes. But a lot of damage to the state deliver flood. They occur during the rainy season, when the deep rivers overflow their banks.

The coastline of the country is very long line. The Korean peninsula indented bays and gulfs. Near its shores there are at least 3,000 islands of South Korea. Many areas of land have little area. They have no permanent population. In addition to Jeju Island are considered to be large such Islands as Ulleungdo and Ganghwa. After a volcanic eruption of the island of Ulleungdo appeared in the Sea of ​​Japan. He was removed from South Korea for 120 km. Beach of the land area is a series of sharp rocks and inaccessible slopes. On Ulleungdo tourists come to mountain climbing and fishing. Ganghwa Island is located in a place where the state borders with North Korea, at the mouth of the Han River. Here come the fans of history, to see ancient dolmens and forts.

Island South Korea, basically, arethe area of ​​moderate climate. On the territory of the country clearly tracked 4 seasons. In the spring, there are a maximum number of sunny days per year. In June, July and the rainy season continues. On the island of Jeju is dominated by a subtropical climate. It is warmer than the rest of Korea. In winter, the area is dry and very humid in the summer.

What to buy in Moscow. What to bring out ...