Home>Articles about South Korea>Tourism in South Korea - the development, photo 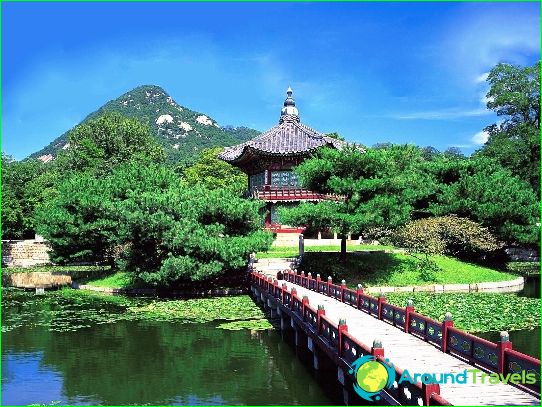 This Asian country has a beautifulname - the "Land of Morning Calm." This undoubtedly helps to increase the flow of tourists who want to see the beauty of your eyes. And not only the residents of the Far East, but also more remote areas.

Tourism in South Korea tied to a beach holiday inyear period and providing a complete set of services to fans of winter action sports, especially skiers. Picturesque country can surprise and national color, standing next to the monuments of history and heaped up skyscrapers.

South Korea - a relatively small country,that you can drive around for the day. Tourists prefer to travel by rail, especially since not so long ago there appeared a novelty tourist train, which resembles a good hotel.

Let the rooms are small, but very cozy, thererestaurant, where you can brighten up the road, and the specific platform, with its stunning scenery Korean. Other popular types of transport - bus and passenger ferries.

This country is considered one of the most prosperousnot only in Asia but also in the world, as street crime has been reduced to a minimum. Of course, unwary tourists can deceive here, but still a chance to get into a situation much less.

In South Korea, should be afraid of another, namely,hit by a car, since the number of road accidents is quite high. Therefore, it is important not to forget about the rules of traffic and be very careful on the streets.

In South Korean hotel has its own classification system, which they receive from the National Agency, a total of five classes and the difference between them is insignificant.

Some tourists prefer to stay in the so-called condominiums, small size hotels having a bar or restaurant and parking.

Exotic way of accommodation is not ready to chooseall, meanwhile, it is possible to stay quartered in one of the local monasteries, and even get to know him quite closed life. And in the architectural reserve has its own amazing accommodation for tourists, decorated in national traditions.

Life in the monastery

A special program has been developed in South Korea,which provides the opportunity for any traveler to spend some time in a Buddhist monastery. According to the program of your stay in the monastery, the tourist will have time:

Guests of the country, who want to spend time in monasteries, to become more and more every year.

Holidays in Slovakia in August: prices and ...