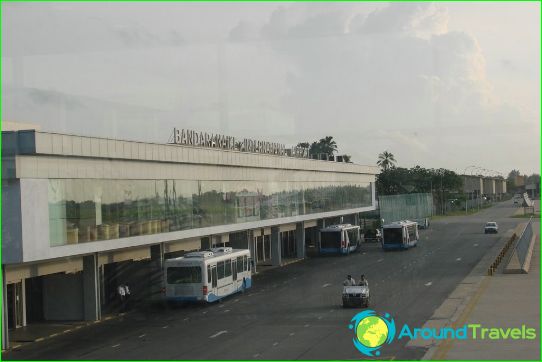 Bandaranaike Airport - one of the threeinternational airports of the Democratic Socialist Republic of Sri Lanka. The airport is located 35 km. from the largest city of this republic - Colombo. Air gates of the city are cooperating with many airlines around the world, including with Russia. However, it should be noted that the direct flights to Colombo airport not only with transfers.

The international airport in Colombo was builtBritish in the early 1940s in Katunayake. Originally its name was - Royal Katunayaka airport. During the Second World War, the airport was used as a base for the Air Force.
After the war, the airport no longer cope with the increasing flow of passengers. Therefore, it expanded and renovated in 1983.

The international airport in Colombo as a whole is not inferior to other airports. Apart from the main passenger terminal, the airport also has 3 trucks.
Among passenger services include: representation of banks, ATMs for cash withdrawal, currency exchange, cafes and restaurants, shops, room mother and child, etc.
If necessary, recourse to the clinic, which is located directly in the airport terminal.
For Business Class passengers have a waiting room Superior.

Airport staff in Colombo works very quickly. Passport control, and getting luggage passes pretty quickly. At the arrival hall is always "green out", so there are no queues here.
The exception, perhaps, is the customs inspection at departure. There are sometimes a queue, but in general it is moving fast enough.

The city of Bandaranaike Airport can be reached in several ways:

Holidays in Greece in January: the prices and ...