Home>Articles on Sri Lanka>Articles about Colombo>Taxis in Colombo - price, order. How much is a taxi in Colombo

Taxis in Colombo - price, order. How much is a taxi in Colombo 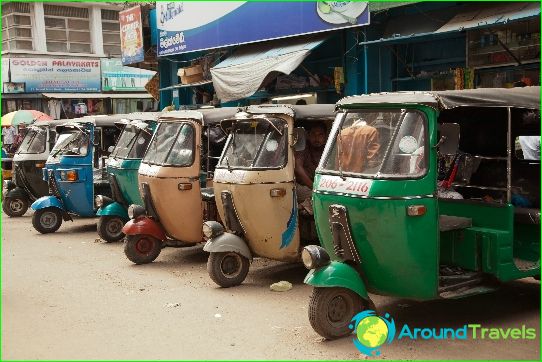 Taxis in Colombo is ready to provide transportservices to its customers around the clock, which is very convenient for guests. In addition, many vehicles are equipped with air conditioning and counters.

To reach the city, upon arrival at the airportColombo is advisable to use official airport taxes - it runs at a fixed price: depending on the location to which you have access, you pay Rs 2000-3000.

If you want to while relaxing in Colomboyou filed a machine, you can contact the travel company, to employees, standing at the special counters at the airport or hotel staff. Find taxi near the hotel, bus station, train station, as well as order a car by telephone.

If you decide to move to 3-wheelauto-rickshaw (they carry 1-3 passengers), it is better to pay attention to the tuk-tuks with counters (they have the label "taxi-meter") - a trip they will be cheaper than a tuk-tuk without meters (in this case the price advisable an agreement before heading to the path).

The fare depends on whereyou stop this form of transport - tuk-Tooker, lying in wait for customers near the tourist places significantly overestimate the price. The trip will be more attractive for the price, if you stop a tuk-tuk driver who travels on the road.

Important: on average, 1 km of track is 30 Sri Lankan rupees.

Ask: "How much is a taxi in Colombo" Learn the answer to this question will help you to information about current tariffs:

It's worth noting that the trip from the airport costs a minimum of 1,600 rupees.

If you are one of those who prefers to take on vacationCar rental in Colombo it is advisable to hire a car with driver (right-hand traffic in the city and chaotic, and large animals often go on the road) - this service will cost you about Rs 6000-8000 / 1 night (extra pay for petrol you do not have ). In this case, the driver will have the whole day to carry you to places that you want, telling along the way about the sights.

Getting around Colombo can be in different modes of transport, the taxi - is the safest and most comfortable way to travel.

Holidays in the Maldives in April: the prices and ...