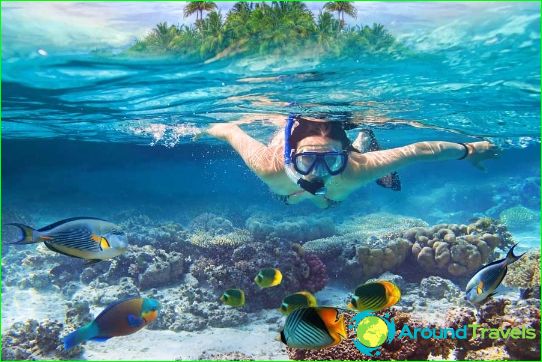 Diving in Sri Lanka will give you not onlysurprisingly warm water and good visibility, but also a variety of dive sites and wrecks. In general in Sri Lanka, there are three dive regions: East, West and South. In addition, each is unique.

All along the coast of Negombo exactly parallelshore stretched three large reef bands. And if the first two - simply beautiful, then marvel at the third reef attracts many diving fans.

Just north of the peninsula is located in NegomboKalpitiya, about which there is the largest reef archipelago - Bar Reef. Due to its rather impressive size, it is home to many species of fish. Here you can also find reef sharks and sea turtles.

The most interesting dive sites are located off the coast resorts of Hikkaduwa and Unawatuna. There will also be interested in Great and Little Basses.

Resort town of Hikkaduwa - realdiving capital of the archipelago, located to the south of the official capital of Sri Lanka. In the immediate vicinity of the coast is quite a lot of wrecks, and which attract divers. More than 20 racks can drive around in a boat just for an hour. This is mainly the ships belonging to the 19th century, but occasionally there are also more "fresh" specimens. In particular, the first oil tanker SS Conch Norsa or boat, to send to the bottom in 1889.

Unawatuna located just two dozenkilometers from Hikkaduwa and, according to the Discovery Channel ranked, the best beaches in the world. Here you should definitely visit the flooded SS Rangoon, the once magnificent passenger steamer, and now resting at thirty-two feet of water.

On the southern tip of the island is locatedreef ridge Great Basses Reef, which caused the collapse of more than one vessel. To admire the "creation of her hands" can be only in the spring, starting from mid-March, but by mid-April, the season ends. The largest and most interesting people here RECOM is considered to be a ship owned by the Mongolian emperor Aurangzeb. This dive site is designed exclusively for experienced divers, as if quite shallow (less than 14 meters) is very strong currents.

Excellent dive sites are located off the coast of Trincomalee and Batticaloa.

Sea depth around Trincomalee harbor a huge number of all kinds of racks, but since they all belong to the period of the Second World War, the need to get official permission.

Battikolao - quiet and I can even say sleepytown, but no less interesting for diving. The local dive sites are in chronological order to tell their guests about the course of World War II in the region.

The airport in Krakow: diagram photo. How to get ...

Airport in Panama: a diagram photo. How to get ...