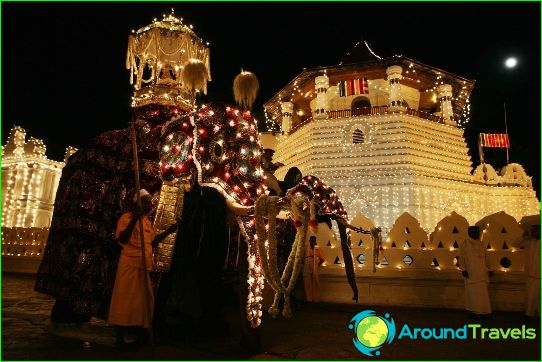 Sri Lanka - a country which has collected on itstiny territory a huge number of different faiths. Here you will meet people professing Islam, Buddhism, Christians and Hindus, so Sri Lanka holidays are significantly different from each other.

It is a Hindu festival dedicated to the future harvest. Celebrating its all Indians living in the country. Celebration is in the middle of January, approximately between 11 and 15 numbers.

Celebrate taken on two consecutive days. On the first day, people traditionally visit churches and pray. Also on this day it decided to cook rice pudding, which certainly added cashew nuts, cardamom pods, sugar, lentils and milk. Engaged exclusively in cooking head of the family, and the rest of its members only in the wings.

The second day is dedicated to the sacred bull, whichonce (according to legend) has helped people in the cultivation of fields. All animals necessarily washed and cleaned, and then decorated with garlands, twisted straw. Since the Thai Pongal is a day of peace and love in this day, you have to forgive all of their abusers.

This is a Buddhist holiday that ends the year. Celebrating it in the month of December.

Dedicated event important for Buddhistsevent - delivery to the territory of the country Bodhi tree sprouts that Buddha fans considered sacred. Today it is a mature tree that grew to epic proportions. In addition, it is the most ancient of all the plants that can be found in Sri Lanka. Every year thousands of pilgrims and simply curious people come to him.

By the beginning of the festival area around the tree is decorated with lanterns and colored flags. It also conducted presentation devoted to the holiday. But the main events held in the city Anarahapure.

Festival of the Sacred Tooth Relic

The holiday is dedicated to the Buddhist shrine - tooththe great Buddha. Celebrating Esala Perahera in Kandy. Continue the celebration of ten days. Here you can admire the exotic dancers dressed in colorful costumes, to see the procession of elephants, as well as bright and Buddhist rituals.

The festival in its current form exists,since the middle of the XVIII century. It was then ruling monarch allowed once a year, ordinary people see the sacred relic - a casket, in which the tooth of the Buddha. Until that time, it allowed only the reigning king.

It is held in July, when the city flockmany pilgrims. The holiday is dedicated to the victory of the war god Skanda over the demonic army. Thousands of people come to the Skanda to ask for help and salvation, and healing from diseases.

Holidays in Seychelles in August: prices and ...