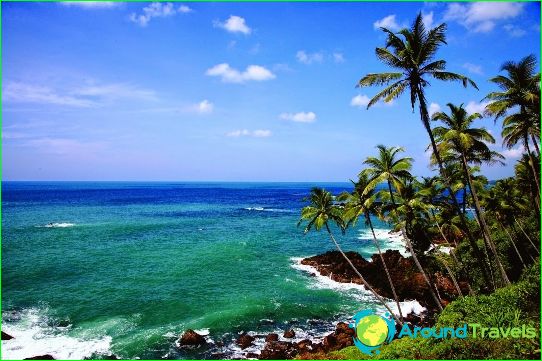 A unique island is considered Sri Lanka,located to the south of India. This is paradise, which has a rich history. Sri Lanka is an island state, which is separated from the mainland by the Strait of Mannar. Indian mythology suggests that earlier Sri Lanka was connected with India, a land bridge. Some fragments of this building survived.

Sri Lanka is among the most ancient civilizationsworld. The country has maintained a distinct culture, which began to develop before our era. In the forests of the island hide numerous ruins of ancient capitals. Originally the land was inhabited by Veddas - pagans. Europeans about Sri Lanka was known even before Christ. The religious sources of the country is referred to as the oldest Buddhist center.

On the territory of the island nation liveCingalese constituting the majority of the population. Apart from these there are Tamils, Malays, burgers, panky, Veddas and infidels. Almost all the locals use Sinhala, having Indo-Aryan origin. The official languages ​​of the country are considered to Tamil and Sinhala. Recently, people actively use the English language, which has become the primary means of communication in the field of tourism and trade.

Politics and the economy of the country

In Sri Lanka these days - it is a unitary republicunder the leadership of Parliament and the President. The official capital is considered to Sri Jayawardenepura Kotte, but unofficially the main city of the state is Colombo. By the end of the last century, the country was referred to as the island of Ceylon. In 1955, Sri Lanka became a member of the UN, as well as entered into the British Commonwealth. The fast growing economy allows it to actively move towards industrialized countries. Earlier, Sri Lanka gained fame as the largest exporter of coconuts, tea, cinnamon, rubber, precious stones and coffee. Today, the country is developing production, processing industry, the financial sector and telecommunications. Sri Lanka has a well-developed economic coastal zone. In addition, in the Gulf of Mannar rich deposits of oil have been discovered.

Sri Lanka Island - an area dominationequatorial climate. The weather is always warm. Too hot on the island does not happen, because under the influence of ocean winds, the air temperature is slightly reduced. Coldest in the central highlands. The climatic conditions of the island vary, depending on the altitude. The coast is very hot during the day and at night. A more temperate climate is observed in mountain areas. The tea plantation areas, placing the cool evenings and cold nights.