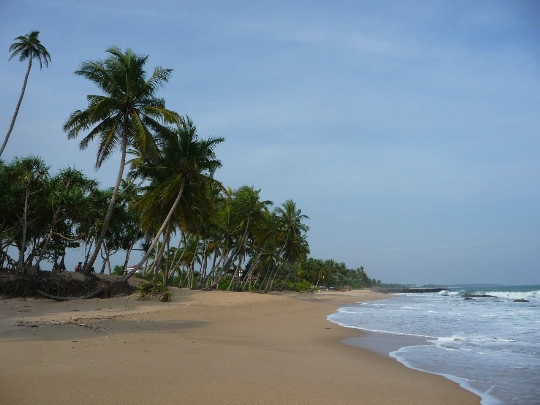 The island nation of Sri Lanka gained worldknown for wonderful beaches and high-quality tea. This country is located near the southern coast of India, in the Indian Ocean. Northern Sri Lanka for a long time was considered the territory of the military. After 2009, the situation was resolved, and it was opened to the travelers that have stimulated the growth of tourist flow. In recent years, the northern part of the country has again become unsafe place for tourists.

In the north of Sri Lanka presented the relief plains,a flat and hilly. In the center and south of the country is located highlands with the highest point - Mount Pidurutalala. In the south-west of Sri Lanka has a tropical evergreen forest, where there are ferns, banyan, various palms, ebony and others. Many years ago, the island territory was covered by jungle, but most of the forests were cut down in the XIX century to make room for plantations. On the lands of Sri Lanka grow coffee, rice, tea, coconuts and other countries Business cards -. Spices, tea and amazing gems that production center is the city of Ratnapura.

North of Sri Lanka is in the monsoonsubequatorial climate and the south - in the equatorial zone. The temperature in the lowlands round is kept at 27 degrees. In mountainous areas, it is equal to + 23-25 ​​degrees. In the summer on the island are abundant rains. Since the mid-autumn until January there is also fall rainfall and strong winds prevail.

What to see in the north

Five districts form the northern provinces of the country: Mannar, Jaffna, Kilinochchi, Vavuniya and Mullaitivu. The administrative center of the region - the city of Jaffna, which is located on the same peninsula. North of Sri Lanka has been at war for three centuries. This was reflected in all spheres of life. In this part of the country the natural beauty, historical sites, interesting architecture. Previously, the city was considered the kingdom of Jaffna, which has lost its independence after the appearance on the Portuguese island. Next Jaffna passed into the power of different peoples colonizers. The outbreak of civil war lasted 300 years and ended only in 2009. Today, Jaffna - is the largest commercial and transportation center of the island. The local population is made up of Tamils ​​and Sinhalese. Tamils, who came from South India, are adherents of Hinduism. In the north of Sri Lanka, you can see the many Hindu temples. Jaffna is connected to the island causeway. Getting to the city is possible only with transfers from Colombo.