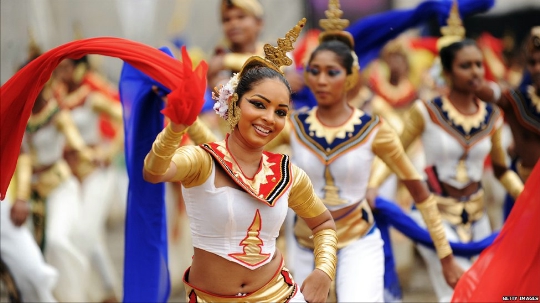 Island off the southern coast of the Indian subcontinent used to be calledCeylon, and it is from here originally - the famous and delicious black Ceylon tea. Today's life of Sri Lankans, of course, had many modern signs and flows much faster than many centuries ago. But in the countryside still preserves the good old tradition of Sri Lanka, to meet with that person so eager traveler.

Beggars and the full moon

The poor inhabitants of the island has long been engaged inbegging. Professional beggars - one of Sri Lanka's traditions, which often causes some discomfort among tourists. With a little bit of small pockets of money, you can stop the flow of those wishing to receive financial aid, but should be given a coin, already moving away from the sights or viewed from the market.
Sri Lankan tradition, associated with the full moon,It has ancient roots. On this day on the island, no one works, so that the planning of purchases or trips should take care in advance. In Poya day when the full moon shines proudly in the sky, it decided to meditate and search for the meaning of life with all sorts of ways netrudozatratnymi.

The chaos and the unknown forces

Traffic on the island - one of the oldestSri Lankan tradition. In the sense that the emergence of traffic signals and controllers had no effect on the order on the roads, and rent bikes or cars in Ceylon is still equated with stunts. There are mixed in a bunch of horses, people, cars, buses and bikes, and riding on the wrong side of the road or in general is not considered anything out of the ordinary.
Rules of conduct on Sri Lankan roads, there are only three:

On the island you should not use your left hand,touching his interlocutor when greeting, or during a meal. She Sri Lanka traditionally considered not clean. Does not show the other party bare feet and always remove shoes when entering a temple. Do not exposed on the beach beyond measure and do not practice sunbathing topless - you, at least, do not understand or, worse still, may complain of this liberty of the local police.