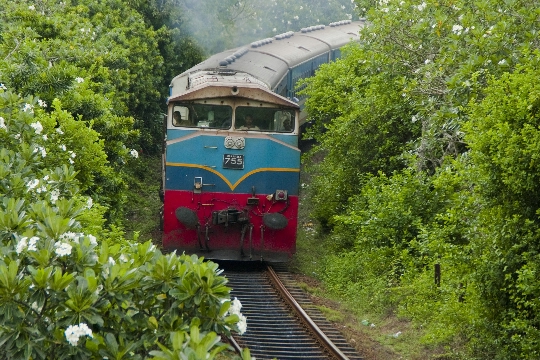 Sri Lanka's population to move around the countryIt uses the railroad, taxis and buses. For long trips are more suitable trains and buses. Railroad country has an average length of about 1447 km.

Sri Lanka Train - is a popular and affordable formpublic transport. They consistently go if there is no force majeure. Malfunctions of the railway system caused mainly by natural factors:. Debris, alluvium soil and other ways to repair takes place in the shortest possible time. On the train in Sri Lanka are expected to be the most convenient and reliable way to travel.

Specificity of the Sri Lanka Railways

Railway communication is managed bygovernment companies SLR ( «Railways Sri Lanka"). It is considered the railway monopoly in the state. The national rail network connects the commercial capital of the country with tourist centers and other settlements. Ways pass through the scenic, especially the main line railway. It goes past the beautiful forests, plantations and technological structures, including bridges.

The entire railway system is divided intothree areas. The rail network consists of nine lines. The main hub of Colombo Fort station is considered. Information on the movement of trains are available at the website of the state of Sri Lanka Railways: http://www.railway.gov.lk.

When planning a route, keep in mind that if a train goesvia Colombo, then the city will need to transfer to another train. Time on such a dock should be considered. Train schedule in Sri Lanka can be found on the site eservices.railway.gov.lk. The trains run between major cities. On the day followed by a few trains from Colombo to Kandy.

Tickets for the first class is better to bookin advance, otherwise you can stay without a job. Most of the local population prefers to use other classes, so there are cars crowded.

Prices for train tickets in Sri Lanka varydepending on the class. The train has three classes of seats. First class sleeper implies a comfortable place to sleep. Such cars prefer wealthy citizens who need additional services and amenities. The cars of the third and second classes together have minor differences. In Sri Lanka, there is also a long-distance express trains and convoys. Private train excursions are designed for travel around the country and are designed for wealthy passengers.

Bus tours to China. The cost of bus tours ...

Kitchen Azerbaijan: photo, dishes and recipes of the national ...