Home>Articles about Syria>Syria Flag photo, history, the value of the state flag colors of Syria

Syria Flag photo, history, the value of the state flag colors of Syria 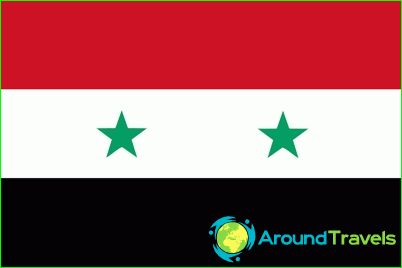 The flag of the Syrian Arab Republic in official use since 1980.

Description and proportions of the flag of Syria

Rectangular flag Syrian flag hasthree horizontal strips of equal width. The lower band is black, medium - white, while the upper is made of bright red. At the same distance from the edges of the cloth and its center on the white stripe there are two five-pointed stars made green. In proportion to the width of the flag refers to the length of 2: 3.
The colors that can be seen on the flag of Syria,It is traditional for many countries in the Arab region. Green on it symbolizes not only the Islamic religion, but the Fatimid dynasty. These Muslim caliphs ruled in North Africa since the late X and XII until the middle ages. White has been traditional for the Umayyad Caliphate of Damascus who led throughout the VII-VIII centuries. Black Stripe - tribute to the Abbasid dynasty, whose power extended to the territory of the Caliphate from the VIII to XII century.
Red flag field represents the blood shedall martyrs for the freedom and independence of the country. The stars on the flag - is Syria and Egypt, the people who were a part of the United Arab Republic.

The history of the flag of Syria

Once it was declared in 1918Syria's independence from Ottoman rule over the country raised the flag of the Arab revolt. It was a tricolor with horizontal stripes, going in the order: white, green and black, starting from the bottom. From the shaft across the width of the flag departed red isosceles triangle.
On this basis, we developed a cloth flagSyrian kingdom, which replaced the French authorities received the mandatory law. Divided into four parts later, the country has existed in a fragmented state until 1936. Unified Syria raised the green-white-black flag with the five-pointed red stars, which served her, and after the signing of the Treaty of Independence in 1946.
Having formed in tandem with Egypt in 1958United Arab Republic, Syria has adopted as the national flag symbol, similar to today's. Withdrawal from the SAR returned Syrians former flag. Then came the coup, in which power is received Baath Party, and the place on the flagpoles - red, white and black banners with the three stars of green on a white field. The intrigue was the fact that the same flag at that time was flying over Iraq, and therefore a possible alliance between them and Syria has created a lot of political gossip.
The current flag was finally adopted as the official symbol of the country in 1980.

Bus tours to Norway. The cost of bus tours ...

Airport Vorkuta: diagram photo. How to get ...