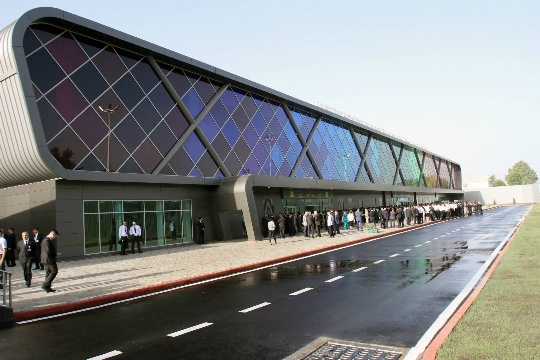 This mountainous country - the birthplace of the ancient civilizationOne of the most popular tourist destinations among travelers from CIS countries. They come here lovers magnificent views of the snow-capped peaks, the fans of this pilaf, and all those interested in history and architecture of the east. Russian tourists are always welcome at the airports of Tajikistan - even a visa to visit the country hospitable hosts he did not require.
Direct Flights to Dushanbe operate "Tajikistan Airlines", in addition to Moscow to join the Central Asian capital Wings airline UTair. Direct flight takes only 4 hours.

International flights take four airports of the country except the capital and foreign guests popular:

Major air carriers based inDushanbe airport, - Somon Air and Tajik Air. In their present schedule flights to Moscow, Novosibirsk, Almaty, New Delhi, Khorog, Franfurt, Urumqi, Krasnoyarsk, Istanbul and several other cities in the world. Regular air service between the airport, Tajikistan and Turkey, UAE, Kyrgyzstan, Afghanistan and China support the carriers of these countries - on a regular basis, and seasonally.
The new terminal at the international capitalTajik airport was put into operation in 2014. It has everything for the convenience of passengers waiting for flights. The terminal building opened duty free shops, cafes, currency exchange offices and lounges.

What to buy in Vienna. What to bring out ...