Dushanbe - the capital of Tajikistan 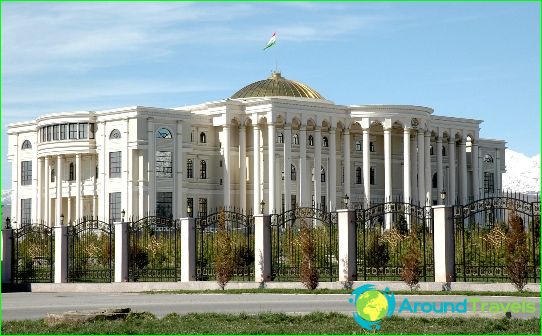 The capital of Tajikistan, Dushanbe city, is translated as "Monday". Even the name of the city says that tourists are waiting for new experiences, and the other, quite different from the usual, Tajikistan.

The history of the city began with the fact that in the early XVIIcentury at the crossroads of Asian roads on Monday staged a small bazaar. A little later, the bazaar has become a small village, to grow more and more. The village became a district center, where bustling markets worked not only once a week. Today in Dushanbe built not one wide street, there are several large areas and very beautiful park with a fountain always crowded with people.

When you first arrived in the capital of Tajikistan,certainly include the hiking route visit the Botanical Garden, which pleases the eyes of their guests insanely beautiful variegated plant. This is the first botanical garden, which originally had a huge number of different plants in the world. Creation of Botanical Garden (1940) - the merit of the famous scientist, biologist Gursky. That is why the garden is named after him, which is quite natural. four thousand trees and shrubs are found here, copies of which were collected in different parts of the world.

In this area, there is another, a local name - Friendship Square. On the square is always amazingly clean, however, as in the whole city.

Dusti - the main city square. Dushanbe residents call it the "face" of the capital. Here are a variety of major events (festivals, exhibitions, concerts, promotions, etc.). On the square you can always see many tourists, but the townspeople do not mind to walk on it.

In the center of Friendship monument is located,dedicated to the main Tajik governor Ismail Samani. The monument was erected on the 1100th anniversary of the birth of the ruler: under the golden arch of Ismail Samani holds a golden scepter. The height of the monument is thirty meters.

So it is called now, and the base at the time in1937, he was named Academic Theatre. November 7, 1937 was played performance "Earth", sponsored by the famous N. Vitra. Then in the play the actors involved Tajik Academic Theatre. Lakhuti. But later, more precisely, three years after its founding, the theater was renamed the Tajik Drama Theater. Vladimir Mayakovsky. Theatre hall remained empty ever not even in war. After the war, the glory of the theater went around the world, and it began to be considered one of the best theaters of the USSR.

The capital of Uzbekistan: map, photo. What is the capital city in ...