Home>Articles about Tajikistan>Flag Tajikistan: photos, history, meaning of colors of the national flag of Tajikistan

Flag Tajikistan: photos, history, meaning of colors of the national flag of Tajikistan 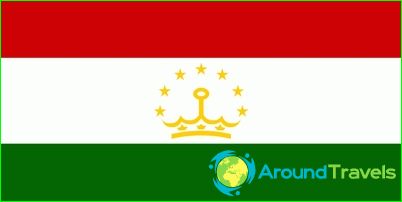 Each country must have their officialcharacters that will allocate it from all countries and emphasize its independence. Someone these characters are preserved since the first settlements, someone they constantly underwent some changes and transformations.

Flag of Tajikistan is considered quite youngsymbols. It was adopted after the collapse of the Soviet Union in 1992, the twenty-fourth of November. However, in fact, he did not change in comparison with its predecessor - the flag of the Tajik SSR.

Flag consists of three horizontal bands of red, white and green colors. On the white part of the flag is placed a golden crown, which is crowned with seven pentagonal stars.

However, mistakenly believing that the color data has beenrandomly selected. Actually, this color scheme dates back to the first time the existence of the ancient Iranian society on the territory of modern Tajikistan. Even then, the red, white and green colors characterize the three branches of government, the three parts of society.

The red color symbolizes the great warriors,who were not afraid to protect open spaces and boundaries of his native state. Warriors, which at times might sacrifice their lives just to protect their land. The green color symbolizes the farmers, their relationship with nature. Prosperity, wealth of natural resources - that described the green at that time. Well, the white, the color of purity and innocence symbolized spiritual power. It also meant the holiness and spiritual purity of thoughts and people.

The seven stars on the flag represent the modern prosperity and happiness. Number seven in Tajikistan relates to the magic numbers that bring luck and prosperity.

Now Tajikistan is considered a promisinga country which has abundant natural resources and economic potential. It's a wonderful country, which annually attracts thousands of tourists to its wonderful region. The originality of culture, national character and favorable climate - that's what awaits travelers in Tajikistan.

Rent a car in Slovenia. Car Rental in ...