The population of Tajikistan 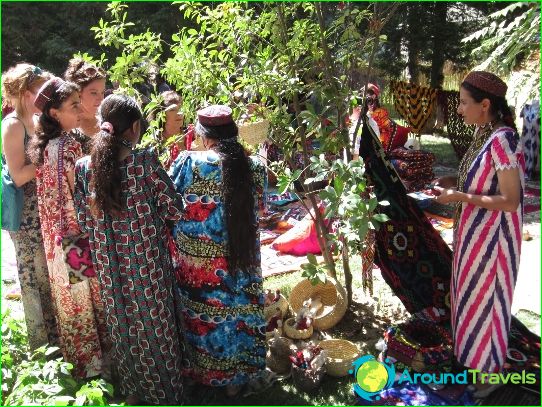 Tajikistan's population is over 7 million people.
Tajikistan is a multinational republic - here you can meet representatives of 80 nationalities.
National composition:
- Tajiks (80%);
- Uzbeks (16%);
- Kirghiz (1%);
- Russian (1%);
- Other nations (2%).
Motley ethnic composition of Tajikistan due tothe fact that throughout the history of the Republic is constantly committed to the invasion, resulting in Tajikistan is created, the various states disintegrated.
On average 1 km2 is home to 53 people, butthe population is unevenly placed on the territory of the country is densely populated lower portions of large rivers, and to sparsely populated areas are slopes and highlands.
Official language - Tajik, a language of international communication - Russian. In addition, it stands out among the Uzbek and Kyrgyz common languages.
Big cities: Dushanbe, Kulyab, Kurgan-Tube, Khujand.
Tajiks are Muslims (Sunni, Shiite), the Russian population are Orthodox Christians.

They live up to 67 years on average Tajiks.
The reason is quite low life expectancyIt lies in malnutrition and receiving inadequate treatment. According to research by think tank The Social Progress Interactive, Tajikistan occupies 95 place in the ranking of the population access to food and health services.
Life of people carry heart disease, tuberculosis, acute infectious diseases (diphtheria, malaria, dysentery, polio).
Yet residents of Tajikistan have something to brag - they are among the three leaders in fewest drunk alcohol.

The traditions and customs of the people of Tajikistan

Tajiks living in the plains, have interestingwedding traditions. Tajik wedding lasts seven days: on the first day the young announce their marriage. The next day the two families gather for festive lunches and dinners, which lasted for 3 days.
On day 5, to secure the newlyweds Unionhigher forces, Imam should conduct the rite (the young have to give each other an oath). After this, the great festival of singing and dancing. A 6 day the bride's family go on a visit to the groom and spend the night there - so ends a long wedding ceremony.
And according to the wedding ceremony of Tajiks living innorthern regions, the bride in her husband's house should be transported after sunset. This should be 3 times the bride circle around the fire, near the divorced husband home by the light of torches.
If you decide to visit Tajikistan, you will not see here is nothing artificial - there are no highways, bustling metropolises and there is no eternal neon signs.
Tajikistan - a perfect place for those who want to be alone with nature.

How to fly from Chita to Moscow? Time ...