Home>Articles about Tajikistan>The rivers of Tajikistan - a photo, a list description

The rivers of Tajikistan - a photo, a list description

The rivers of Tajikistan 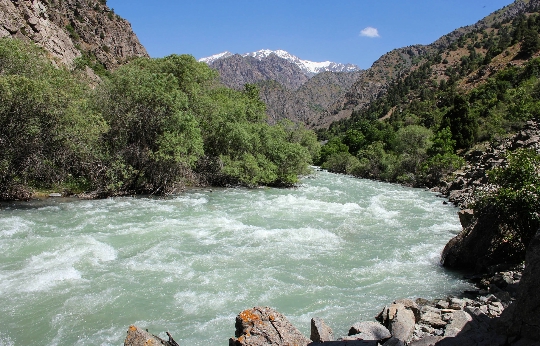 Tajikistan's rivers are full of water and are mainly related to the Aral Sea basin. And only some fall into the water of Lake Karakul and the Tarim River.

The bed of the Amu Darya passes through the territory immediatelyfour countries - Afghanistan, Tajikistan, Uzbekistan and Turkmenistan. The total length of the channel - 2400 kilometers. Of these, the country runs 1415 kilometers. The source of the Amu Darya is formed by confluence of two rivers - Vakhsh and Panj. The mouth of the river - the water of the Aral Sea (at the confluence forms a large delta).

Tributaries of the river a little. On average, over the Amudarya water takes Kafirnigan, Surkhandarya and Sherebada, as well as a left tributary - the Kunduz River. And then, down to the confluence of tributaries is no more. The waters of the river are widely used, but because of the Aral Sea to the Amu Darya does not reach. This is what has been one of the reasons for its drying.

One of the rivers, where the channel is locatedexclusively in the territory of Tajikistan. It is the right tributary of the Panj River. The total length of the river - 103 km. The source formed by the junction of two rivers - one descends from glaciers Vanj ridge, the other - with a ridge of the Academy of Sciences (western slope). The channel runs between Vanj Darvoz and ridges.

Geographically, the river bed runs through the landsTajikistan (Sughd province) and Uzbekistan (Kashkadarya region). Conventionally, the river three titles: in the upper reaches - Obihunda; the average for - Shinachasay; Bottom - Maymanakadarya.

The total length of the channel - 378 kilometers. The source of the river is located at an altitude of 2960 meters above sea level and is formed by two nameless rivers. Major tributaries Akdarya (Aksu); Tanhidyzadarya; Guzardarya.

The total length of the channel - 88 kilometers. Mux is located on the territory of Tajikistan Jirgatal area. Source - the confluence of two rivers: Seldara and Sauksoy (Fedchenko Glacier and Big Saukdara).

Kyzylsu, which translated means "red river"It flows through the territory of Kyrgyzstan and Tajikistan. Source - Trans-Alay Range slopes. The total length of the channel - 235 kilometers. At the confluence with the river Muksu gives rise to the Vakhsh River.

The total length of the river - 786 kmand they pass through the territory of Tajikistan. The source of the river is located on the slopes of the Pamirs, but the place of its confluence with the waters of the Panj River gives rise to the great Amu Darya. The river is the main source for irrigation and power generation.

Children's camps in Yalta in the summer. Children's ...