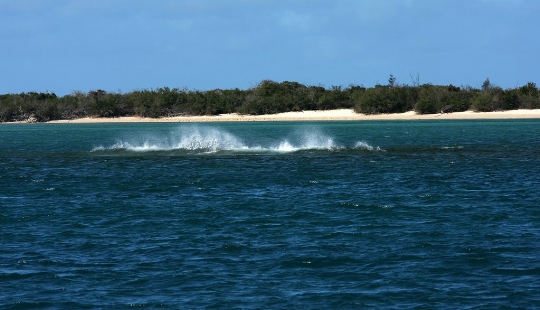 The edge of the continental sea of ​​the Indian Oceanis the Arafura Sea. It is located between New Guinea and Australia, and the islands of Kai Tanimbar. Arafura is reminiscent of the Timor Sea. This similarity is due to the same climate and offshore neighborhood. Arafura Sea received the designation because of alfuram - Aboriginal Moukkskih islands. The water area has an area of ​​about 1,017,000 square meters. km. its maximum depth in the cavity Aru is 3860 m, while the average -. 186 m the shallow part of the sea is great. Arafura Sea is considered to be relatively young. World ocean level has risen, resulting in the sushi place, a new sea - Arafura. For this reason it is shallow.

Map Arafura Sea demonstrates thatits banks heavily indented. The largest is the Bay of Carpentaria. It is located in the southern part of the area. With the Pacific Ocean in the East Sea is connected via Torressova Strait. It is small, but wide strait. Deep straits in northern associated with the Arafura Sea Seram Sea and Banda.

The Arafura Sea region dominated by monsoontropical climate. Water temperature is an average of about 25-28 degrees. The salinity of seawater is about 35 ppm. In the summer monsoon is blowing from the north-west, and in winter - monsoon from the south-east. Tides reach 2.5 m in height. The maximum height of the high tide mark is 7 m. Sea often have hurricanes and typhoons. Seasonal climate is manifested by alternating periods of drought with the long rains.

The bottom of the reservoir covers the sand and in some places -lime sludge. Deep-sea areas have red clay. Throughout the shelf there are numerous banks and shoals of coral buildings. The underwater world here is the same as in the Timor Sea. These seas have the same vegetation. In coastal areas there are many different species of algae and corals. The Arafura Sea is not the abundance of phytoplankton and fitovodorosley as the water there is too salty and warm. But in this sea of ​​rich fauna. The pond boasts an abundance of molluscs, crustaceans, benthic organisms, echinoderms. Experts identify more than 300 species of fish in its waters. Dangerous marine animals are found also in the Arafura Sea. These include some corals, jellyfish, blue-ringed octopus, siphonophores Physalia and other human mutilations may cause a shark, stingray, barracuda..

Arafura Sea Coast is covered by tropicalforests. New Guinea different marshy shores, in the wilds of the forest where rare animals are found. Coastal land inhabited by little. Therefore, the Arafura Sea is different environmental cleanliness. There are no major ports and famous resorts.

Airport Stuttgart: diagram photo. How to get ...

Dutch Kitchen: photos, dishes and recipes of the national ...