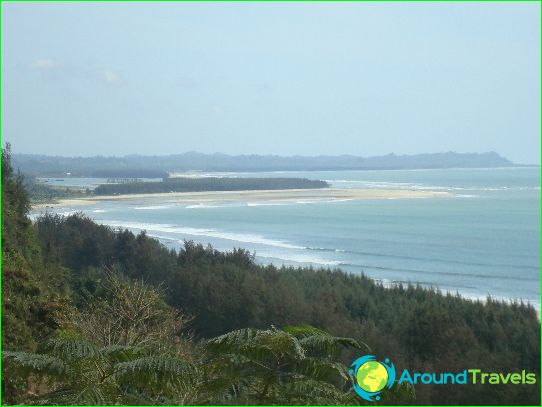 Bay of Bengal lies on the north-eastIndian Ocean, between the Nicobar and Andaman Islands and Indochina and the Indian subcontinent. It covers a huge area - 2,172,000 sq. km, therefore, can rightly be considered the sea. The deepest point of the pond - 5258 m, and the average depth is 2590 m in length it stretches for 2090 km and width -. To 1610 km.

On the western shores of the bay are somecountries such as Sri Lanka and India, on the north - Bangladesh, and eastern - Myanmar (Burma). His designation received from the bay area of ​​Bengal, which existed previously. Map shows the Bay of Bengal, now in its place is Bangladesh and West Bengal (India).

The pond is located in the subtropics and tropics zone inthe northern hemisphere. Surface water has the same temperature as the water of the Arabian Sea. In some places the water reaches 29 degrees. Weather on the coast of Bay of Bengal depends on air masses that form over it.

In the winter, spring and summer in the region and NicobarAndaman Islands are formed monsoons. In the summer of the same wind came down on the north-east of India. During the winter months in the Gulf there are huge waves. The height of some of them reaches 20 m. If they fall on the shore, then cause great destruction. The air in January is about 20 degrees temperature in the northern areas. In the southern regions even warmer. There, the average air temperature is 26 degrees. In summer the temperature is kept at 30 degrees. The salinity of the water in the bay is 30-34 ppm. In the Bay of Bengal flow into the river Krishna, Mahanadi, the Ganges, Brahmaputra, Kaveri, and others. They are a little desalinate water views.

Flora and Fauna of the Gulf

The warm climate has led to the existence of corals. They are found near the Nicobar and Andaman Islands, as well as close to the island of Sri Lanka.

In the water, there are a variety of animals. The wealth of the fauna of the Bay of Bengal can be compared only with the ocean and the Arabian Sea. There are crustaceans, corals, mollusks, sponges, fish and others. It is very diverse world of fish. Among them are the colorful, goby, fish cartilage and pemferovyh. In the Gulf are found piloryly, sarganovye and barracuda.

The value of the Bay of Bengal

The Bay is well developed shipping. On its shores are many ports:. Chennai, Vishakhapatnam, Kolkata, Chittagong and other unfavorable environmental situation in the region. In winter and spring the sky of the looming Asian brown cloud. It is a dirty air, which consists of the exhaust, smoke and industrial emissions. This cloud can be seen from space. It is created by the monsoons, which are formed during the cold season. Air pollution adversely affects human health. However, on the coast of the Bay of Bengal has a number of excellent beaches, which are very popular among tourists.

Photos of the Bay of Bengal

Food in Austria. Prices for food in ...

Food in Japan. Prices for food in ...