Home>Different countries>Niger Capital: card photo. What is the capital of Niger?

Niger Capital: card photo. What is the capital of Niger? 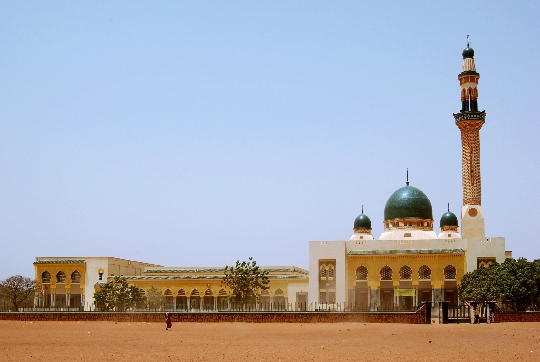 Exotic Niamey, capital of Niger, has a verygood location, area of ​​the city located on both sides of the Niger River, which is considered the main natural attraction. The islands in the river are considered to be capital property.

Description of the current capital of Niger in the late XIX century, it would take only a few lines. The small village, the number of inhabitants does not exceed five hundred people.

Future main town of the state hadto bear all the burdens of French colonization. The favorable geographical location of the negative impact on the political situation, as this is where the French established a military town. On the other hand, it contributed to the expansion of the village, the construction of public buildings and homes, the economy and trade. The population grew rapidly, mainly due to the ethnic groups living in the surrounding areas. Capital has acquired the status of a city only in 1960, when Niger became independent.

This religious building is the main attraction of the capital of Niger, is a beautiful complex of buildings, the mosque itself is an emerald dome, next to it is located a minaret.

Since most of the population of the capitalprofess Islam, the mosque is used for its intended purpose. But there is a difference - it is open to tour groups and single travelers, and for both men and women. Ladies can get even in the central hall - a unique case. This was possible thanks to a beautiful legend, according to which, during a terrible drought in the country, it was decided on a common prayer of all the inhabitants of the country in the same temple.

"The river of rivers"

Niger - the name is not only a country, butand the river flowing through the capital. This main source of water, and gave the name of the state, and the name can be translated as "great river", "river of rivers". It really forms a wide valley in the vicinity of Niamey, is peculiar because the breadbasket of the country. Along the way, it takes all the small rivers and streams, becoming more affluent. But shipping is developed only in certain areas, including from Niamey to the delta; from waterfall to Sutuba Ansongo; from the Kurus to Bamako.

Most attractions are created Niameynature. It is not only the beauty, the river Niger, and scenic tropical arrays in its vicinity. Interesting fact: in the Niger National Museum has an unusual exhibit - tree Tenere. Its uniqueness is that it is able to survive under the most brutal conditions of the African desert. For the Nigerian population that tree became a symbol of life.

Niger Flag photo, history, the value of the state flowers ...