Vientiane - the capital of Laos 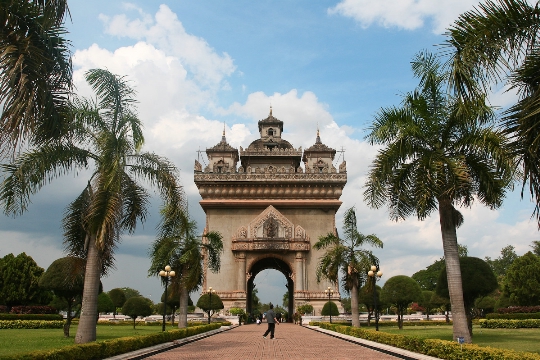 Interestingly, the capital of Laos has a name,which is likely to come a neighbor country, because it is very close in sound and, obviously, has a similar etymology. Title Vientiane linguists translated differently, but equally beautiful sound - "City of sandalwood trees" or "Moon City."

Guests note a striking contrast to the capital ofneighboring Asian cities. Life in the capital city of Laos flows quietly, steadily. Perhaps affected by the impact of the Buddhist religion, professed by most of the population.

Beautiful legend says that the current capital was founded by Prince with a complicated name for a Russian ear - Thattaradtha, the first name of the city and sounded extremely long and complicated.

Historians say more prosaically, that the cityRouge founded, not on an empty place, and around the ancient Hindu temple. Then Rouge were driven out by the Lao civilization, some of them assimilated to the Laotians. Already since 1354 Vientiane served as the administrative center, and from 1563 became the capital.

Then, over the centuries it went askingRelations between Laos and neighboring countries, we note here and visitors from distant Europe, in particular, the French colonialists who left the memory in the form of numerous buildings in the colonial style.

This interesting name was one of the mostpopular markets Vientiane, though it does not work only in the morning. Where you can buy beautiful textiles (ground floor), clothing and jewelery (on the second floor). Local traders priori set inflated prices for their products, so you can safely start bargaining and reduce the price several times, that is sure to delight tourists. But the seller in the loser will not stay in this.

Vientiane is proud of its amazingarchitecture, temple complexes, the so-called stupas, and parks. Tourists in the capital is very difficult, because the list of monuments worth visiting, extensive. The most popular cultural and historic sites are:

Every one of them deserves a separate description, as the Buddha Park, located in the outskirts of the capital, which brings together fantastic sculptures depicting important Buddhist deity.