Home>Different countries>Nauru Capital: map, photo. What is the capital city in Nauru?

Nauru Capital: map, photo. What is the capital city in Nauru?

Yaren - the capital of Nauru 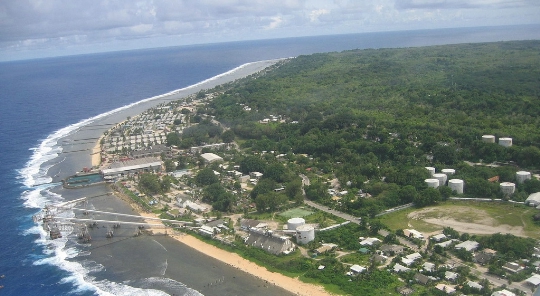 In the Pacific, lost a small coralIsland. It is a small country called the Republic of Nauru. The state became independent in 1968. Its population is only 11 thousand people.

The country boasts many figures fromthe phrase "most": it is the smallest island nation, the smallest independent country and the only country in the world that does not have an official capital. The unofficial capital Nauru - Yaren. This is where the airport is located and the Parliament.

The history of the development of the informal capital

On the territory of the first settlements began Yarenato appear at the beginning of the nineteenth century. They founded the Europeans who come here. Since 1914, the city was ruled by several countries: Australia, UK, New Zealand. During the Second World War, the island was completely occupied by the troops of the Empire of Japan. Following independence, the city Yaren not given the status of the capital, but only named administrative center.

The city's population is 750 people Yaren. Therefore, a large amount of interest here can not be determined. Everything here can see a tourist, it's just the two arms of the museum of Japanese troops during the Second World War. Also around the city is a large number of bunkers and caponiers. On all sides near the island lie the remains of many ships and planes. Many residents of the island belong to the attractions of the city's international airport. Nearby is Lake Moqua Well, it is located under the ground and causing a genuine interest among visitors.

The main part of the city's population - is Nauruans,which belong to the Micronesian group of nations. Of the 750 people it employs 90 percent of nationality. The city is home to about 5 percent of the population of Oceania, 3 per cent of the representatives of China and a few Europeans. The state has two official languages: English and Nauru. Slightly less than half of the population profess the Catholic faith, and the rest are Protestants.

Yaren is very small, but veryinteresting settlement. Here beautiful nature, grow rare flora. Due to the fact that Nauru is a small coral island, is a very poor fauna.

Bus tours to Greece. The cost of bus tours ...