Port-of-Spain - the capital of Trinidad and Tobago 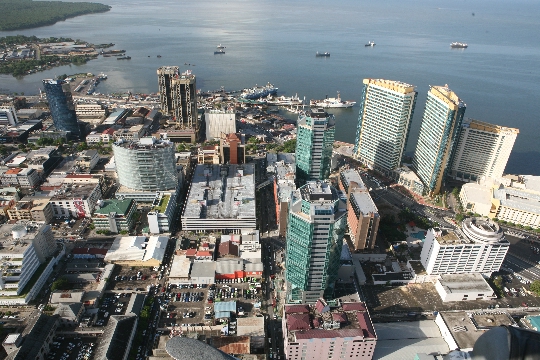 Amazing Port of Spain, capital of Trinidad andTobago is located in a convenient location, on the coast of the Caribbean Sea (Gulf of Paria). Its name will be able to transfer any high school student with a basic knowledge of the English language - "Port of Spain". And immediately are opened some pages of local history, in particular, immigrants from some European countries first embarked on the shore of the island of Trinidad, and, looking around, we decided to found in this heavenly place a new settlement.

The Indians, Spaniards and others

Scrupulous historians hint that can not be accuratelyIt argues that the city was founded by the Spaniards. Because at the same spot once occupied by the ancient Indians, their village had the name Konkerabiya. The first visitors from Europe, arrived on the island in the XVI century, settled here and kept the ancient Indian name.

The current name of the city received in 1797,when he became part of the British colony. Around the village were huge plantation where black slaves grew sugar cane. With the abolition of slavery they migrated in search of better places, but on the island attracted many workers from Pakistan and India.

Currently in Port-of-Spain inhabited by people of different nationalities and religions, most of the believers - are Christians (mostly Protestants and Catholics), there are admirers of Buddhism and Hinduism.

At the crossroads of cultures

The main city of this state proves thatcan coexist peacefully different religions and different cultures, which form the architectural appearance of a modern capital. Among the most remarkable architectural monuments attract tourists:

Tourists are attracted Downtown relating to the mostthe old part of the capital. Historical center - Woodford Square, her first name - Brunswick. Meeting with many architectural monuments of the Port-of-Spain, you can start with this area. Here it is placed: Anglican Cathedral, which was consecrated in honor of the Holy Trinity, the Houses of Parliament, the Supreme Court, the City Council and the National Library.

There are two popular tourist destination point on the mapcapital - is the Royal Botanic Gardens and Zoo Imperial Valley. The first inhabitants of the main plants are on a par with colorful hummingbirds, the zoo you can see a lot of amazing animals in the tropics.