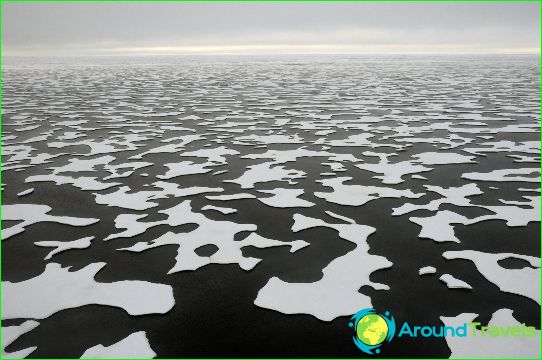 By the basin of the Arctic Ocean belongsChukchi Sea. This is a marginal sea located between Alaska and Chukotka. From the East Siberian Sea it connects Long Strait, with the Beaufort Sea, it combines near Point Barrow. Bering Strait connects the Chukchi Sea to the Bering Sea.

Chukotka Peninsula in the north bordering the Chukchisea. It divides America and Asia and the Pacific and Arctic oceans. Chukotka Autonomous Okrug is located directly in the Western and Eastern hemispheres. This area lies on the shores of three seas: the Chukchi, Bering Sea and East Siberian.

The Chukchi Sea is situated on the shelf. The bottom of the pond reaches an average depth of 40 meters. It is covered with sand, silt and gravel. In the shallows the depth is about 13 m. In this sea there Barrow Canyon, where the depth of 160 m, and Gerald canyon with a maximum depth of 90 m.

Map of the Chukchi Sea makes it possible to seeits border position between two oceans and continents. This feature has led to particular water regime: from the south here come the warm currents of the Pacific Ocean, and from the north - the Arctic cold water. Pressure and temperature difference causes strong winds. On the sea are frequent storms, which raise waves of about 7 m.

Coastal areas of the reservoir are the Russian Federation(Chukotka) and the US (Alaska). The water area is almost always covered with ice. ice drift occurs in the summer when the air temperature reaches 12 degrees. Climatic conditions have developed under the influence of the Pacific Ocean. Above the water area is dominated by polar maritime climate. It is characterized by a minimum of sunlight entering the water. Annual air temperature fluctuations are insignificant.

The value of the Chukchi Sea

Mastering the sea is still difficult asLocal climate is very severe. Powerful ice hamper economic activity of people. The coast of the Chukchi Sea is populated for a long time, but the local population is small. Prosperous life of people depends largely on transport. Transportation pass through the Northern Sea Route. In addition to maritime traffic used polar aviation.

It is also sparsely populated coast of Alaska,despite the discovery of rich oil fields there. According to expert estimates, about 30 billion. Barrels of oil contained in the shelf of the Chukchi Sea. The locals are busy hunting for polar cod, saffron cod, seals, seal, walrus, and others.

Photos of the Chukchi Sea

Dining in Malta. Prices for food at ...

Coat of arms of the Netherlands: the photo, value, description