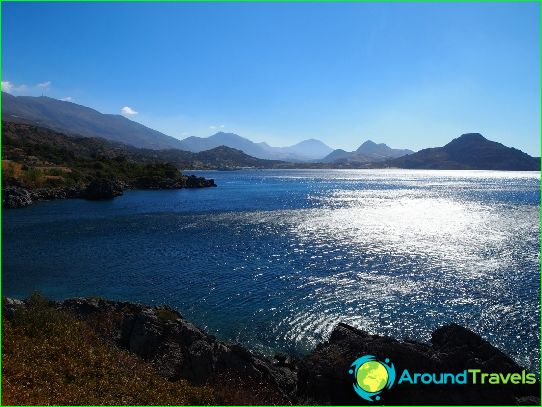 Nature is represented by the Cretan Seavarious kinds of animals and plants. Seawater this reservoir salinity and temperature is favorable for many species of flora and fauna. Cretan Sea is a part of the ecosystem of the Mediterranean basin. Coastal areas have a variety of landscapes. There are rocky beaches, fertile plains, sandy beaches, citrus groves and vineyards. Among the representatives of marine fauna can be identified menolu, sea bass, red Pagel, moray eels, octopus, sea urchin and others. There are also whales, sharks and dolphins.

The area has a Mediterranean Seaclimate. He is considered the healthiest in Europe. Since the beginning of April to November on the coast of the bathing season lasts the Cretan Sea. The water is heated to 25 degrees and above. In winter, the water drops to 10 degrees of temperature (minimum). Average temperature display is 15 degrees in winter. Even at a depth of the average water temperature is 12 degrees.
The water is very warm even in autumn. During the summer, its temperature is kept at 26 degrees on average. Warm it remains until October, so the beginning of autumn on the coast of the Sea of ​​Crete begins velvet season.

Features of the Cretan Sea

This body of water gradually approaches the coast, soentry into the water there is gradual. The sea water is transparent. This makes it possible to observe the underwater life of the Cretan Sea. Resorts northern coast are consistently high demand from tourists. The reason for this popularity lies in the vast number of well-equipped beaches. Many beaches have a "Blue Flag of Europe". Cretan Sea has an unpredictable character. Sometimes there is a long time there is complete calm. On summer days, the reservoir is exposed to winds from the north. At sea, climb high waves that make swimming dangerous.

History of Vilnius. The base development, occurrence of Vilnius