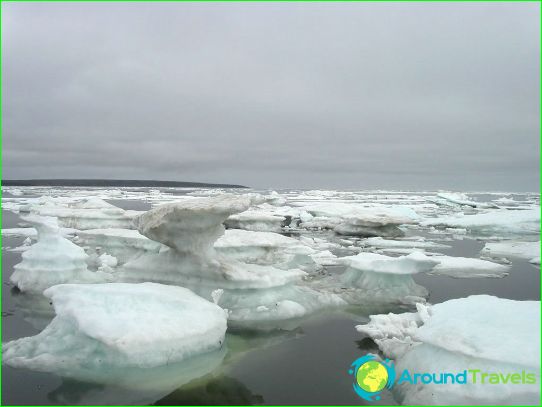 The northern part of Eastern Siberia washesEast-Siberian Sea. It has both natural and conventional boundaries. Map of the East Siberian Sea shows that it is spread over the water area between Wrangel Island and the New Siberian Islands. It connects to the Laptev Sea via the Straits Eterikan, Dmitry Laptev, Sannikov. With the Chukchi Sea it combines Long Strait.

This sea is considered to be marginal continental seas. Its area is 913,000 square meters. km. The deepest point is fixed at a distance of 915 m from surface. Average depth - 54 m in the East Siberian Sea small islands.. Its banks have significant bends, which in some places stretch out deep into the land.
East Siberian Sea is the Arcticof the Arctic seas. On water areas, ice-free, there is a great deal of excitement. The sea Strong waves and winds blowing from the south-east and north-west. Waves reach a height of 5 m. The average height of waves in the sea -. About 3 meters Storm here occur most often during the first days of autumn, when the ice crust to the north retreats. More tranquil is considered the eastern part of the sea. The central areas of the waters also are not stormy. The sea is completely covered by ice from October to July. Ice brings here from the Central Arctic Basin. In winter, the water area is developing fast ice, which is distributed by the shallow western regions. Summer ice free coastal areas. In the east of the sea off the coast of observed floating ice even in the summer.

The coast of the East Siberian Sea is inthe area of ​​the Arctic climate. The waters within the summer has an average air temperature of about 0-2 degrees. In the southern areas the temperature is +4 degrees. In the winter months the air is cooled down to -30 degrees. The salinity of the sea is about 30 ppm.

The value of the East Siberian Sea

It is very hard to reach the sea. It is part of the waters of the Northern Sea Route. On it are transport cargo. The main ports are considered Ambarchik and Pevek. Locals also engaged in production of marine animals and fishing. In coastal areas, the waters have valuable fish:. Cisco, whitefish, whitefish, etc. It is home to walruses, seals, polar bears. East Siberian Sea is the subject of scientific research. Scientists are studying the ice cover, the behavior of ice masses, water level fluctuations and other aspects.

Photos of the East Siberian Sea