Coat of arms of Grenada 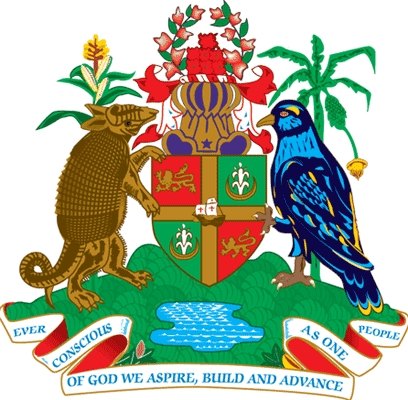 Probably hard to find a more colorful logo onglobe than the coat of arms of Grenada. It contains almost all the colors of the rainbow, from fiery red to purple. Looking at the image of the main character of the island nation, located in the Caribbean Sea, you can imagine what the bright colors are present in the flora and fauna of this paradise planet.

Four colors dominated by the coat of arms - red, blue, yellow, green. Among the elements and signs the main roles are played by:

It may be noted one major difference from the coat of arms of Grenada similar characters in other countries - Supporters size is much larger than the shield, which he held in his paws.

Shield and its symbols

Main place of the coat of arms of Grenada takes shieldgold cross divides it into four symbolic field. In addition, the shield contains five elements, two of which are repeated, are placed diagonally in the fields, and the fifth in the heart. This place is the caravel "Santa Maria", which was owned by the legendary navigator Christopher Columbus. It was he who discovered the island of Grenada in 1498, trying to find a shorter route to India.

Repeated elements that adorn the field shield -British lion and the lily with a gold crescent. Leo, who is considered a symbol of a great European empire, reminiscent of colonial times, although the coat of arms of Grenada was adopted in 1974 with independence.

Crowned stamp composition crown jewels. Coat of Arms of the project authors that was not enough, they have added a golden royal headdress a garland of flowers. Honor enter wreath framing the jewel awarded roses and bougainvillea. And the number of roses (seven) symbolizes the Grenada community and bougainvillea, popular local plant, pleasing Aboriginal and offers extraordinary bright colors.

A few amazing fauna andFlora Grenada can be seen on the country's coat of arms: a battleship armed with corn stalks, Grenadian dove on a background of banana palms. The basis for the composition is a beautiful landscape, the central place in which occupies the most famous lake - Etang.

Children's camps in Orenburg in the summer. Children's ...