Malawi Flag photo, history, meaning of colors of the state flag of Malawi 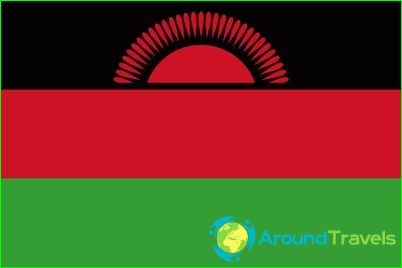 State flag of the Republic of Malawi has received approval in July 1964, the day of the proclamation of independence.

Description and proportions of the flag of Malawi

Malawi Flag has a standard rectangularthe form adopted in the majority of independent states on the political map of the world. The length and width of the flag related to each other in a ratio of 3: 2. The flag can be used by government agencies on land and land troops Malawi. citizens can not legally use the cloth for personal purposes. On the water, Malawi flag can be used both on the civil courts, and on the ships of commercial and government fleet.

Rectangle Malawi flag is divided horizontallythree parts equal in width. The upper band is painted black and represents the population of the African continent, on which the Republic of Malawi. Average flag field - bright red and, according to the authors, represents the blood that has been shed in the struggle for independence of the country and other African countries they are patriots. The lower part of the Malawi flag - light green and recalls the lush vegetation of Malawi's forests and abundant natural resources of the state. At the top of the flag shows a black background with red stylized rising sun.

The colors of the flag were taken from the flag of Malawi Congress Party, which played a major role in the struggle for the independence of African states.

Create in 1891, the British protectorateSub-Saharan Africa has meant that Malawi, like many other countries on the black continent, became the colonial possession of the United Kingdom. The first flag of Nyasaland, which was located on the territory of modern and Malawi, was in 1919 the blue flag. In the upper quarter of the hoist was located British flag. On the right panel of applied coat of arms in the shape of a shield with the jaguar, standing under the rising sun on a mountain top.

At independence in 1964, the Republic ofMalawi adopted a new flag that flies on all flagpoles today. However, in 2010, the form of the flag has been slightly modified. The bands are located in a different order - red, black, green - and in the center of the cloth came round white disk with rays, symbolizing the sun at its zenith. This figure, according to the authors of the ideological flag, had to reflect the progress that took place in the development of the country during the years of independent existence.

The new flag after only two years has been canceled due to the protests of the population, and in May 2012 Malawi again welcomes your day under the rising sun.