Mauritania Flag photo, history, the value of the state flag colors of Mauritania 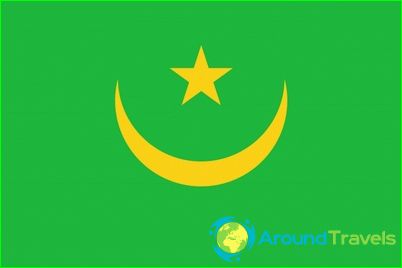 The national flag of the Islamic Republic of Mauritania was adopted April 1, 1959. It is an essential symbol of the country together with the anthem and coat of arms.

Description and proportions of the flag of Mauritania

Mauritania Flag has a classic rectangular shape. The length of the flag belongs to its width in a ratio of 3: 2.
The main field of state of Mauritania flagdone in dark green. At its center is located down a crescent arc covering the lower part of the five-pointed star. Star and crescent applied golden color.
Green field of cloth - a tribute to the mainreligion professed in the country. Green has always been a symbol of Islam. It is dedicated to the star and crescent. Their yellow color symbolizes the sands of the Sahara desert, in whose territory is located and Mauritania.
At the national flag based Moorish andemblem or coat of arms. It is a circle, the fringe of which is made in white. The field border green label inscribed with the official name of the country, performed in two languages: Arabic at the top of the circle and French - from the bottom.
The central part of the country's emblem - a circledark green in shade matching the color of the flag of Mauritania. On a green field with gold inscribed a horizontal crescent and five-pointed star. Against the background of white is applied to the date palm, the fruits of which are the backbone of the country's exports.

The history of the flag of Mauritania

Mauritania Flag was first proposed in 1958, when the country received the status of autonomy in the French community. Previously, for more than half a century, these territories were French possessions.
April 1, 1959 was approved by the Mauritanian flagofficially, and in late 1960, the country gained independence from France. Since Mauritania flag raised on flagpoles of all the country, a symbol of sovereignty and free choice of an Islamic state. However, the flag does not reflect the actual situation with the freedoms of citizens in the country. Mauritania - the only country in the world in which slavery was officially exist and today about a fifth of its inhabitants - disenfranchised property Berber ruling class.