Home>Different countries>Flag of Bhutan: photos, history, meaning of colors of the national flag of Bhutan 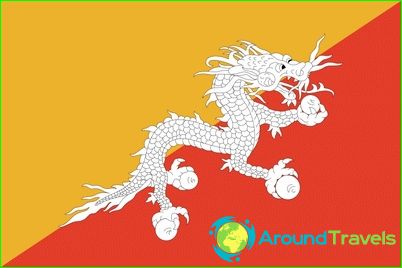 The national flag of Bhutan was adopted in 1972. It was then on the throne King Jigme Singye Wangchuck, who held some important reforms for the country.

Description and proportions of the flag of Bhutan

Bhutan Flag is a classicflag rectangular, like most of the flags of all the world of sovereign and independent states. Its length and width are related to each other in a ratio of 3: 2. Bhutanese flag has a field of two colors. It is divided diagonally from bottom to top and left to right. Part of a panel adjacent to the shaft, is painted in a dark yellow color, and the opposite - orange.
On the border of the two fields in the center of the flag of Bhutanis applied to the image of the dragon, called Bhutanese Druk. The dragon head facing away from the shaft in the direction of the free edge. Druck portrayed in white with a black outline drawn on its details.
Dragon on the Bhutanese flag - a symbol namestate. Translated from the local dialect means Bhutan Land of the Dragon, and precious crystals that Druk holds in paws, reminiscent of the priceless treasures hidden in the depths of that power. The yellow part of the flag of Bhutan - a tribute to the ruling monarchy and the red-orange part recalls that the majority of the population professes Buddhism.

Bhutan Flag was first adopted in the XIX century and sincesince its appearance has changed somewhat, but in general the concept remained the same. The oldest version of the cloth used as the symbol of the State until 1956, different from the present only a darker shade of orange field. Deep red color was not the only difference. Druk on the first flag of Bhutan was turned his head toward the flagpole and flag itself was less elongated in shape and approaching to the equilateral rectangle.
In 1956, Bhutan flag has undergone regularchanges, and within 13 years of the dragon has been rotated to the free edge of the shaft and flag paint became even darker. Form a panel remained still close to the square.
Political changes in 1972 made the countrymore open. The monarch made the decision about the possibility of visiting Bhutanese tourists and journalists, and the new flag was modern proportions and colors. Finally the panel approved the national flag at the beginning of June 1972. Today Bhutan flag is used for all objects in the country, located on the land, and the ratio of people in the country to its national character is very respectful.

Cuisine of Morocco: photos, dishes and recipes of the national ...

How to fly from Beijing to Moscow? Time ...