Botswana Flag photo, history, the value of the state flag colors of Botswana 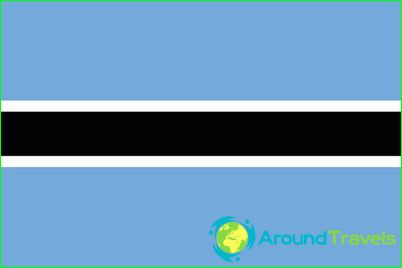 State of the Republic of Botswana flag was raised for the first time in September 1966, when there was a declaration of independence.

Description and proportions of the flag of Botswana

Botswana flag is typical of all independentrectangular States. The length and width of a panel related to each other as in the classic proportions of 3: 2. The flag can be used, according to the law of the state, for all purposes on land. It is allowed to raise and civilians, and private companies, and the authorities. Botswana flag is used and the country's armed forces.
Field Botswana flag is divided into severalhorizontal stripes, unequal width. In the middle is a black stripe dividing panel equally. The top and bottom of it is a thin white stripes. The upper and lower parts of the Botswana flag - light blue, and the most extensive. Black box represents the indigenous people of the state. White stripes - ethnic minorities, and the blue field - the sky over the African continent. Blue stripes flag of Botswana and remind of the importance and value of fresh water, which the country has always lacked. The motto of the Republic sounds like "Let it rain!", And he even charted on the country's coat of arms.
Botswana Coat of arms contains the most important for the country's inhabitantssymbols and colors of the national flag. Heraldic shield of the coat of arms is supported by two zebras, standing on either side of his hind legs. They rely on a blue ribbon inscribed with her motto of Botswana. Animals are holding a tusk of an elephant and a branch plant sorghum, which are the symbols of the main export products in the past and present of the country.
The shield shows the gears - symbolsindustrialization of the Botswana economy, and three blue wavy lines reminiscent of the importance of water conservation. The head of a bull on the board - this is a symbolic image of another important branch of the economy - cattle.

The history of the flag of Botswana

In 1885, the government of Botswana has come underBritish protectorate in order to protect against the expansion of the German Empire on the African continent. Flag of Botswana throughout the colonial period served as the UK flag, and then - a blue flag, which the British government was a symbol priedstavlen Kryzhi in the top quarter of the field near the staff. The right side contains the logo of Botswana. Similar flags were present in each of the colonial possessions of Her Majesty.
The proclamation in 1966 of an independent state, called the Republic of Botswana, was the cause of development and approval of the new flag, emblem and national anthem.

Restaurants in Europe - the best places to eat and ...