Home>Different countries>Flag of Brunei: photos, history, meaning of colors of the national flag of Brunei 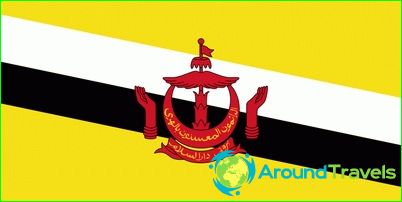 As an official symbol of the SultanateBrunei Darussalam national flag was adopted in September 1959. It was then that the United Kingdom provided its Asian protectorate autonomy, which allowed the Sultan of Brunei to determine the course of internal self-government.

Description and proportions of the flag of Brunei

The cloth of the flag of Brunei has the usualrectangular. The length of the flag is twice its width. The flag is allowed to use land agencies and civilians, including private and merchant ships of the fleet of the country.
Brunei Flag has as its primary colorfield of bright yellow. Top-down and left-right flag crossed by two contiguous strips, the top of which - the white and the lower - black. In the center of Brunei flag is the emblem of the country, made in red and gold.
Brunei emblem was created and approved in another1921. This important state symbol on the flag of Brunei has as main five different elements. In its center, and on top - the royal umbrella,
sockets which are wings of a bird. Over umbrella - box and closes the bottom of the crescent, the horns of which are turned up. Under a crescent moon on the gold ribbon is written the motto of the country, and on either side of the crescent applied palms image.
The yellow flag of Brunei is a traditional andit was used long before the advent of the modern state symbol. Elements of Brunei emblem symbolize royal power and concern for the welfare of the Sultan and the prosperity of their own citizens. Crescent on the arms recalls that the main religion is Islam, the inhabitants of the Sultanate, as written on the tape meant motto "Always in service under the guidance of God."

How to fly from London to Moscow? Time ...