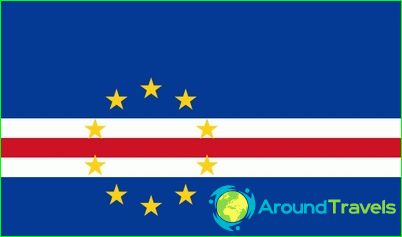 The national flag of the Republic of Cape Verde for the first time was officially lifted in September 1992, when the country embarked on the path of democratic development.

Description and proportions of the flag of Cape Verde

The flag Cape Verde flag has a classicrectangular. However, its proportions are not quite typical for the majority of independent flags of the world powers. The ratio of the flag's length to its width can be expressed as the proportion of 17:10. Cape Verde Flag can be used for all purposes on land and on water. It can raise the citizens of the state and officials. The flag used by land armed forces of the country and its Navy. The State of Cape Verde flag flying on the masts of private and state courts and in the merchant navy ships.
Cape Verde flag is a flagdeep blue, horizontally divided into two unequal parts group of thin strips. In the center of the group is the bright red thin strip, and the top and bottom of it - the white of the same width. In the left half of the cloth are arranged in a circle ten gold five-pointed stars. center of the circle is on the red flag strip. The radius of the circle is equal to a quarter of the flag width of the rectangle.
The total width of the group of red and white stripes is a quarter of the width of the flag of Cape Verde. The same occupies the lower part of the blue. The width of the upper blue field is equal to half the width of the whole cloth.
The blue field of the flag of Cape Verde represent the waterAtlantic Ocean, in which the "drift" of the Cape Verde Islands, which are located and the state. Blue - the color of the sky and over the country, located in the tropics. The red stripe on the flag of Cape Verde - a tribute to the strong and sustained disposition of the islanders, and white - the symbol of peace, which seeks people. By the number of inhabited islands of Cape Verde to the flag applied number of stars, united into a single state circle.

Being from the XV century, a colony of Portugal, the islandCape Verde living under the flag of the governor. In the middle of the twentieth century colonial existence ceases to hold people in the country, and on the islands of a movement for independence. PAIGC party, which led the liberation struggle, as the flag was used tricolor red-yellow-green flag with a black five-pointed star in the shaft. The colors of the flag symbolize the spilled blood of patriots, the desire for material prosperity and hope for the best. Black star was a symbol of the unity of all the peoples of the African continent.
This flag became a state in 1974a symbol of the newly independent Guinea-Bissau. Authority Cape Verde Portugal recognized a few months later, and July 5, 1975 the country was declared independent.
The first flag of a sovereign state waspanel on the left side is on the vertical red box placed black five-pointed star surrounded by a wreath of green corn stalks with ripe cobs. It served as the base of a wreath of yellow seashell. In 1992, a new flag was replaced by the former on the flagpoles, and until today it serves the public without modification.

Croatia Flag photo, history, the value of the state flowers ...