Flag of the Central African Republic 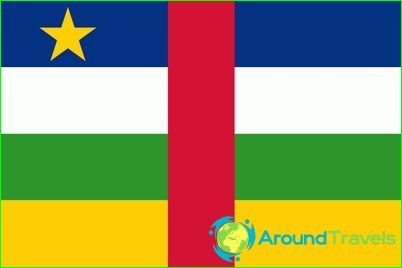 The national flag of the Central AfricanRepublic was approved in December 1958 and became a symbol of the country, which in a short time gained independence from French colonial rule.

Description and proportions of the flag CAR

CAR flag, like the majority of panels in the world hasrectangular. Its length and width are related to each other in the ratio 5: 3. CAR flag are allowed to use for all purposes on land. It can lift and officials, and individuals to use public authorities and public organizations, as well as - the armed forces of the state.
CAR flag is a flag,horizontally divided into four equal strips. The lower part of it is yellow, followed by a light green band, then - white and located on top of a dark blue field. Vertical exactly in the middle of CAR flag crosses the red band, the width of which is equal to the width of any of the horizontal stripes. In the upper left corner of the flag decorates a yellow five-pointed star, the color coincides with a touch of the lower band of the flag.
The red color on the flag of the Central African Republic recalls the blood,State patriots spilled in the struggle for independence. The blue part of the flag - the sky over the African continent, which is a symbol of freedom. The white stripe symbolizes the traditional world and the desire for a quiet life, and green - the country's residents hope for better times, and their faith in justice. The yellow part of the flag shows tolerance and willingness of the people of CAR to build their future, which serves as a guide in the star.
CAR Flags are present and on the country's coat of arms. Two cloth deployed in the background of the emblem, the front of which is a heraldic shield with a picture on it traditionally important symbols for the inhabitants of the Central African Republic.

Central African Republic Flag ProjectHe engaged for two years before independence, personally Barthelemy Boganda. This man played an important role in the liberation struggle against French colonial rule. He believed that despite years of dependence and exploitation of African European state, the fate of these two countries are inextricably linked. He was able to express this relationship in the combination of colors of the flag of CAR, where there are traditional Pan-African colors, and the colors of the French tricolor history.

The streets of Vienna - the photo, the name. List of well-known ...