Chad Flag photo, history, the value of the state flag colors of Chad 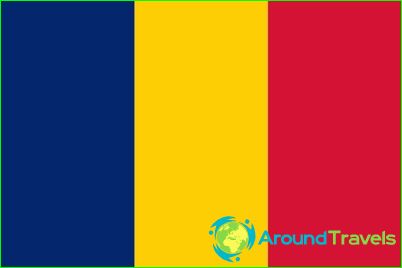 Republic of Chad The national flag was adopted in November 1959 shortly after receiving an autonomous status within the French community.

Description and proportions of the flag of Chad

Golf Chad flag is rectangular in shape. The panel is divided vertically into three equal absolute width of the rectangle, each of which has its own color. Near to the shaft band Chad flag - dark blue. The free edge is made of bright red, and the middle - bright yellow. The length of the flag of Chad relates to its width according to the proportion of 3: 2.
In Chad flag was influenced by stateFrench character, the country under colonial rule for a long time which was the African state. The blue field of the flag of Chad - is not only one of the colors of the French national flag, but also a symbol of the sky and water, giving hope for a brighter future.
The red field of the flag of Chad - a tribute to the memory andrespect for the victims of repression. This piece of cloth is reminiscent of spilled blood of the defenders of freedom and independence. Yellow Chad flag painted in honor of the sun, which shines generously on the African continent, and in honor of the desert, whose hot sands are home to tribes of nomads from Chad.

The history of the flag of Chad

Republic of Chad's independence was proclaimedautumn of 1958. Over the next year, the country enjoyed a French flag and a developed local political activists and artists. Six months later, Chad Flag project was submitted for consideration, but he was not accepted due to the fact that the pan-African colors, it used, were used on the flags of other states that were once French colonies. Then it was decided to leave one of the fields of Chad flag blue, thus underlining the tribute to the colonial past and marking the main characters - the water and the sky.
A decade later, in Chad was adopted and the emblemcountry in which the flag colors are repeated in all topics. The central motif of the coat of arms - a shield with zigzag blue and gold stripes, symbolizing the water of the great lake Chad. Shield keep rampant lion and a goat, a figure which also applied with gold paint.
Above the shield goes bright red African sun, and in the bottom of the coat of arms of the plotting of the chief of the National Order of the country, surrounded by a laurel wreath green.
Coat of arms of Chad as its flag State is an integral symbol of the state.