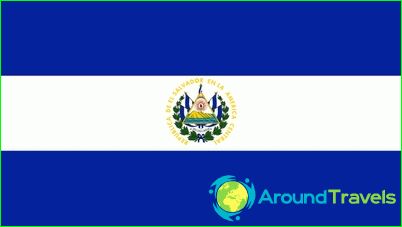 Republic of El Salvador National Flag was adopted officially as an integral symbol of the country in May 1912.

Description and proportions of the flag of El Salvador

Flag of El Salvador has a classic rectangular shape, like the overwhelming majority of Independent States flag on the world map.
But the proportion of the width and length ratio of the flag of the flag of El Salvador is perhaps the most unusual in the world - 189: 335.
Flag of El Salvador is a rectangle,which is divided horizontally into three identical stripes. The average is white, and the top and bottom - dark blue. In the center of the flag within the white field emblem affixed Salvador. It is a circle, whose boundaries are indicated inscription in Spanish, meaning "The Republic of El Salvador in Central America." In the middle of the circle is a triangle with the prisoners inside the five volcanoes, towering from the blue waves of the sea. It's a symbolic depiction of the five countries that have joined together in a federation of Central America. Above them on the stick rises a Phrygian cap, a symbol of free peoples, and the struggle for independence. The date inscribed on the emblem, reminiscent of the September 15, 1912, when Salvador got sovereignty. For Delta there are five flags of El Salvador, and combines song together laurel wreath, fourteen bundles of leaves which represent the same number of departments as part of the country.
Blue stripes flag of El Salvador represent the sky and the waters of the Pacific, and the white field - the desire of its people to live in peace and build a fair society.

The history of the flag of El Salvador

As a historical flag of El Salvadorused several different versions of the cloth. In 1821, gained independence from Spanish colonial rule, the inhabitants of countries have adopted as the flag of El Salvador rectangular cloth with three horizontal stripes. The central and the most extensive was dark yellow, and extreme and twice more subtle - red. A year later, El Salvador flag became blue and white as it is today. It is only missing coat.
In 1865, El Salvador's flag was kind ofStars and Stripes. Five thin blue and four white stripes are the same horizontal rectangle divided into nine fields. At the top of the shaft is located in a red square with twelve white stars in three horizontal rows.
The final version of the modern flag of El Salvador has taken its place at the flagpoles in 1912 and has since remained unchanged.

Stores in Baden-Baden. Shopping malls and boutiques in the ...