Home>Different countries>Flag of Gabon: photos, history, meaning of colors of the national flag of Gabon

Flag of Gabon: photos, history, meaning of colors of the national flag of Gabon 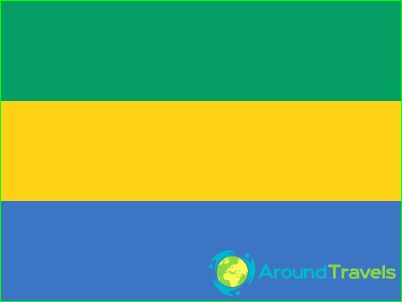 The state flag of the Gabonese RepublicIt is an integral part of the official symbols of the country. It was adopted in August 1960, when the country gained its independence and ceased to be a French colonial possession.

Description and proportions of the flag of Gabon

Gabonese flag rectangular panel hassomewhat unusual proportions compared with most flags of the world powers. Its width and length are correlated with each other in a ratio of 3: 4, making the shape of the flag close to a square.
The flag is divided horizontally into three parts of equal value, the top of which is painted in a light green color. Average band Gabon flag - yellow, and the bottom - bright blue.
Gabonese flag in accordance with the legislation of the country can be used on land by civilians, and on the water - private vessels and merchant marine ships.
Gabon flag colors are not accidentally taken. They are a symbolic reflection of its geographical position on the world map. The green part of the flag - it's equatorial forests in most parts of the country, blue - a reminder of the fact that Gabon has access to the Atlantic Ocean. The yellow band symbolizes the equator, dividing the country into two parts, and the hot African sun.
Gabon flag colors are present on the armscountry, which is a heraldic shield, which held two standing on its hind legs panther. The shield is divided into the upper part of the green, yellow and blue bottom center. The shield applied black sailboat, stern which flies the flag of Gabon. The ship is a symbol of the state, which is confidently tends to a bright future, but the Panthers look like that on the guard are brave conquests of Gabon president and his entourage. The motto of the country inscribed on the arms, means "Come Together" and symbolizes the unbreakable bond between the leadership of the country and its people.

The history of the flag of Gabon

The first state flag of Gabon was establishedin 1959. It was a rectangle, divided by narrow yellow band into two equal parts. The bottom of the flag of Gabon had a bright blue color, and the top was a flag of France, enclosed in Kryzhi closer to the shaft, and a light green box to the right.
At independence in 1960, the country is notonly found stability, but also had the opportunity to develop in their own way. Flag of Gabon has also undergone changes. With the cloth removed the French tricolor and yellow band expanded, making all three fields on the flag of Gabon equivalent area.