Home>Different countries>Flag of the Gambia: photos, history, the value of the state flag colors of Gambia

Flag of the Gambia: photos, history, the value of the state flag colors of Gambia

Flag of the Gambia 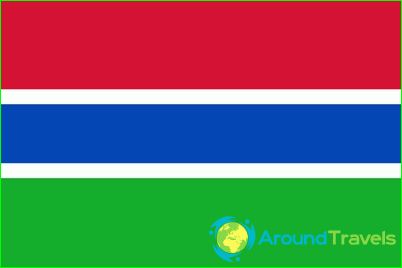 State of the Republic of The Gambia flag was adopted in February 1965, along with the country's constitution.

Description and proportions of the flag of the Gambia

The flag Gambia flag has a classicrectangular. Its width and length are correlated in proportion to each other of 2: 3. flag field is divided into five unequal in horizontal stripes. The upper band of the flag of The Gambia has a bright red color, it is equal to the width of the bottom - dark green. In the center of the flag is a dark blue band whose width is slightly smaller. The blue field of the Gambia flag on the extreme red and green separated by thin white stripes. Proportionally bandwidths on the flag may be represented by formula 6: 1: 4: 1: 6.
White - a symbol of peace and prosperity, as well ason the flags of other countries. Blue Field pays homage to the Gambia River, whose waters bring life of the country and its people. It flows between the green and red jungle savannah, which in the Gambia are the main natural zones.
State flag of Gambia, according to the lawthe country can be used for any purpose, both on land and on water. He raised both citizens and public services, and state officials. Gambia Flag used its army and naval forces, as well as commercial and private fleet of ships.
The coat of arms of the country, adopted a little earlier,Gambian flag colors are repeated. Heraldic shield has a blue background with white and green trim and white ribbon on which is inscribed "Progress. Peace. Prosperity "- the motto of the Republic - red shot down.

The history of the Gambia flag

As a British protectorate, the countryI used for many years as a state flag, typical of the colonial possessions of the European states. It was a panel of dark blue in the upper quarter near to a staff whose Kryzhi fit UK flag. On the right side of the cloth was applied coat of arms colonies Gambia. In the circle of the emblem has been dominated by an elephant with a raised trunk, behind which the palm was visible between the mountains.
In 1965, the Republic of the Gambia artists inventedthe idea of ​​its own flag, which bring to life helped in the UK Stamp board. In 1963, the country gained full independence, and after a year and a half new Gambian flag adorned with an all flagpoles of the smallest African state.

Where better to relax in the Maldives. Where to go ...