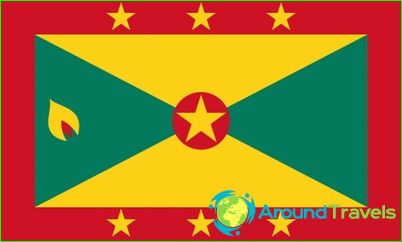 The national flag of Grenada was first raised in February 1974, when the country became independent within the British Commonwealth.

Description and proportions of the flag of Grenada

The flag of Grenada flag is rectangular in shape, like the majority of the flags of states on the political map of the world. Its length and width are related to each other according to the ratio of 5: 3.
The flag of Grenada flag has a red border onperimeter. on its top and bottom coated with three five-pointed star yellow. Main Flag field is divided into four triangles by diagonal lines. Triangles, which serves as the base and the free edge of the shaft have a light green color. The remaining two - bright yellow. In a place of convergence of diagonal lines on the flag of Grenada is a round disc of red color, which is inscribed in five-pointed yellow star.
The green triangle flag at the beginning of the shaft, there is an image of red and yellow nutmeg.
Granada flag approved for use by allagencies, authorities and private citizens on the ground. It is the flag of the country's Armed Forces. For the needs of the civilian fleet used a similar flag with only a slightly different combination of length and width directions. Moisture Navy Grenada is a white rectangle, divided into four equal parts red St. George's cross. The upper quadrangle near the staff busy on it the national flag of Grenada. The proportion of the aspect ratio on the flag of the Navy of Grenada looks like 1: 2.
The red border on the flag represents Grenadaher courage zaschitnikovi unity of the people, which invisibly protect the peace and prosperity of the islands. Green triangles - a field of Grenada, where many crops are grown and, in particular, nutmeg - the main export product. Yellow flag on the field - the sunlight that floods the land of Grenada and the seven stars on the flag - is the number of provinces in the country.

The history of the flag of Grenada

While in colonial dependence onBritain Grenada as the state was forced to take the flag, similar to the flags of other overseas possessions of Her Majesty. It was a blue rectangular panel in the upper left side in which the hernia was located British flag. To the right on a blue field was applied the coat of arms of Granada. That flag existed from 1875 until 1967 with different variations of the emblem.
Then, Granada won the right internalGovernment and adopted as the flag tricolor of blue, yellow and green colors. In 1974, the artist George Anthony has presented a new flag design that adorned the flagpoles and now independent of Grenada.