Guyana Flag photo, history, the value of the state flag colors of Guyana 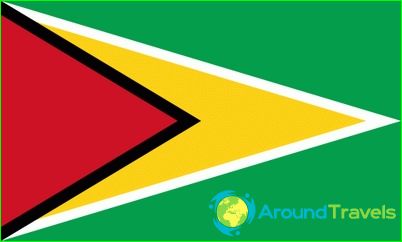 The national flag of the Cooperative Republic of Guyana was first raised officially in May 1966, when the country received a long-awaited independence.

Description and proportions of the flag of Guyana

Rectangular flag Guyana flag hasthe proportion of the aspect ratio of 3: 5. The main field at the Guyana flag - light green. From the flagpole it cuts isosceles triangle of yellow color, whose base is the entire length of the spear, and the apex is located in the middle of the free edge. The triangle has a rim in the form of white stripes. In the yellow box the flag is given another triangle, which overlaps the yellow box. His foundation - Spear edge, and the top is in gold. Border red triangle - black.
The color scheme of the flag of Guyana is not chosen by chance. Each flag has its own field of nature and conveys the basic principles and hopes of the people of Guyana. The green of the flag - agricultural land, which play an important role in the economic development of the state. In addition, green - it is the nature of the wealth of Guyana. The red triangle symbolizes the perseverance of the people of Guyana in building advanced society, and black border - resistance of the people before the tests. Gold in Guyana flag indicates the richness of its mineral resources, and the white border of yellow triangle - this is Guyana rivers that bring life and plants, and animals.
Some colors of the flag of Guyana and used tothe emblem of the country, established by in 1966. Coat of arms of the State bestowed the Queen of England and the South American state parliament approved the symbol at its meeting.
Guyana flag approved for use on the land allorganizations, citizens and officials. The flag is flying on flagpoles Army Armed Forces. To use the water used in Guyana flag State, unlike that of the land is only in certain proportions of the flag. The length of the maritime character of the country more than its width exactly twice.

The history of the flag of Guyana

During the period of colonial British ruleGuyana used a flag, typical of all overseas possessions of Her Majesty. Blue rectangle was in the top quarter of the hoist the British flag in Kryzhi, and the right of its parts - the coat of arms of Guyana. Adopted in 1875, this flag was used until 1966. Only the form of the coat of arms, inscribed in a white disc on the right side of the cloth.

Holidays in Slovakia in July: the prices and ...

Taxis in Guangzhou - price, order. How many ...