Flag Liberia: photos, history, the value of the state flag colors of Liberia 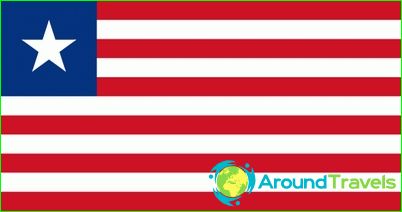 The national flag of the Republic of Liberia wasadopted in July 1847. The name of the state in West Africa means "land of liberty" and the date of approval of the Liberian flag coincides with the day of the proclamation of independence.

Description and proportions of the flag of Liberia

Liberian flag is a flag of the classical rectangular shape, the length of which relates to its width in a somewhat unusual proportions - 19:10.
Field Liberian flag is very similar to the flagUnited States of America. It is composed of eleven horizontal stripes equal in width to each other. Six bands are red, and the other five - white. The extreme top and bottom of the flag of Liberia are stripes of red.
At the top of the flag at the flagpole located square field of dark blue color. At its center is applied to a white five-pointed star spaced at equal distances from the edges of the blue square.
Liberia flag colors have symbolic meaningand represent important moments in the history of the country and the aspirations of the people of Liberia. The red stripes symbolize the courage and bravery of the state independence of defenders. White reminded of the high morals of the population. Star says the release of the slaves and the desire of peace and equality. A blue square on the Liberian flag - the symbol of the black continent.
Flag on the present and previous versionsLiberia Coat of Arms. Adopted in 1889, the first coat of the country was a shield, a top field which was blue and white five-pointed star was displayed in the center. The bottom of the coat of arms consisted of a vertically arranged red and white stripes. In 1921, the country adopted a new coat of arms on the shield which depicts a sailboat. Behind the shield were placed two crossed the Liberian flag.

The history of the flag of Liberia

The previous version of the Liberian flag, was adopted in April1827. Then the set of American settlers arrived in Liberia and founded a colony, bought from local tribal leaders a lot of land. Their symbol was a striped red-white flag, which differs from the modern version of a lack of white five-pointed star. Before it was placed a white cross in a blue square flag of Liberia.
In 1847, the settlers declared independencethe new republic and established its own flag, which has reached our days intact. The close relationship with the United States and the support of the American colonial society are reflected in the official symbol of state of Liberia.