Home>Different countries>Flag of Mali: photos, history, the value of the state flag colors of Mali

Flag of Mali: photos, history, the value of the state flag colors of Mali 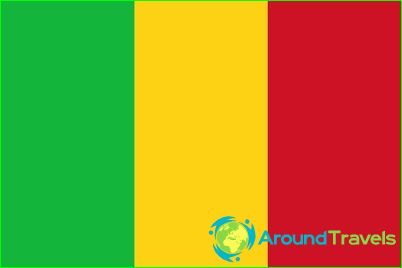 The national flag of the Republic of Mali flag was approved in January 1961, shortly after the country's exit from the French community, and independence.

Description and proportions of the flag of Mali

Flag of Mali - a banner rightquadrangular shape, whose length corresponds to the width in the proportion of 3: 2. It is used for all purposes on land and as a state, and as a civilian. This flag is the official flag of the armed forces of the republic.
Flag of Mali is divided vertically into three equally important on the part of the width. The strip closest to the shaft, is painted in a light green color. The middle of the flag of Mali - bright yellow, and the free edge - bright red color.
The green part of the flag symbolizes hope. It is the color of fields and pastures of Mali, its agricultural land, the value of which can not be overestimated in the national economy. Green for Malians recalls the importance of innovation and processes of modernization of the economy and production.
Yellow flags mean field Mali recallsits wealth of underground mineral resources, which are full of minerals. These treasures of every citizen willing to defend with their lives, as it is aware of their importance for the development of the state. The red color of the free edge of the flag of Mali makes people not to forget the blood spilled heroes in the struggle for freedom and sovereignty.
The emblem of Mali is no traditional flag colorsstate. Bright blue disc depicting a falcon and white bows and arrows accompanied by a crown, symbolizing the rising sun made the dark-yellow paint.

The first flag after receiving an autonomous statusState the name of the Republic of the Sudan within the French community was the banner, copy the French flag, with the only difference being that in the white field was applied to the black figure Kanaga. It is a stylized image of a man applied supporters of the idea of ​​exclusivity of the African race.
Association of the Republic of Senegal and the Sudanpossible to raise the new flag proclaimed in 1959 by the Federation of Mali. They became today's tricolor flag, on average - yellow - part of which is applied to the image Kanaga.
This figure was removed from the flag in 1961, and then was finally approved by the current version of the flag of Mali as a state.

Children's camps in the Orenburg region in the summer. ...