Mozambique Flag photo, history, the value of the state flag colors of Mozambique 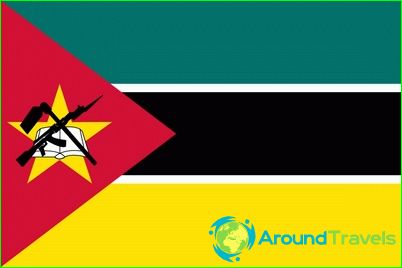 Accepted May 1, 1983 the national flag of the Republic of Mozambique is its official symbol along with the coat of arms and anthem.

Description and proportions of the flag of Mozambique

Mozambican flag rectangular panel dividedseveral fields. Three broad horizontal stripes of equal width from top to bottom to symbolize the flag field is important for the people of the country things. Green - this vegetable wealth of Mozambique, its forests. The black color of the flag - a tribute to the African continent. Bright yellow lower band symbolizes the natural resources of the country, its natural resources. Three major bands on the flag of Mozambique separated from each other by thin white border. The white color on the flag - is an expression of the just struggle of the people of Mozambique for independence and peace.
From the shaft to the flag field cuts isoscelesred triangle, which caused the yellow star. Her field is represented by an open book and placed crosswise Kalashnikov rifle and hoe. These symbols highlight the importance of education, development and production of national defense against external enemies. Red triangular field recalls the blood spilled in the struggle against colonialism and the need to protect the country's sovereignty.
The proportion of relations between the parties the flag Mozambique flag - 2: 3.

The history of the flag of Mozambique

It is a Portuguese colony, Mozambique1962 joined the Liberation Front and used in the period from 1974 to 1975 tricolor green-black-yellow with a red triangle at the hoist.
Then, the country gained independence and raiseda new flag, which used the same color. Seven wedges converged on the top of the hoist and formed a field of yellow, black, red and green colors, separated by white stripes. This was followed by some more changes in the state attributes, as a result of which the flag has regained horizontal fields.
In 1983, the modern flag of Mozambique has taken itsplace on flagpoles. In 2005, the competition on the state symbols were introduced more than 100 new flag projects, due to the fact that the parliamentary opposition to the country in favor of the removal of images from his arms.
However, the best project so far has not been putin life, as the country considers public machine on the flag of Mozambique an important part of his past and present, and therefore categorically does not agree to make any changes to the existing now the country's flag.