Home>Different countries>Flag of Namibia: photos, history, the value of the state flag colors of Namibia

Flag of Namibia: photos, history, the value of the state flag colors of Namibia 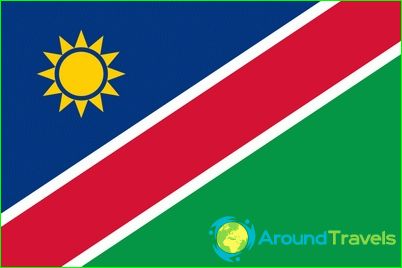 State symbol of the country, the Republic of Namibia for the first time the flag was hoisted on flagpoles in March 1990, when it declared independence.

Description and proportions of the flag of Namibia

Namibian flag rectangular panel hasstandard ratio of width and length, expressed by a ratio of 2: 3. flag field is divided into two equal parts red stripe, the width of which is equal to a quarter of the width of the flag. The band goes from left to right and from bottom to top of the bottom corner from the flagpole to the upper corner of the free edge. The upper left part of the Namibia flag has a dark blue color, and the bottom right triangle - green. From these fields, the red part of the flag of Namibia separated thin white stripes. On the blue triangle Namibia flag a stylized image of a golden circular disk with twelve triangles, symbolizing the sun.
Namibia flag motif is present on the armscountries. The colors of the flag - is drawing heraldic shield, which is supported on both sides of Oryx. These antelopes symbolize pride among Namibians and courage. coat of arms shield is crowned with an eagle, and the bottom antelope rely on a stylized image of the Namib Desert.
Namibia flag on the laws of the country can be used by all public authorities and individuals on land and water. He is the official flag of the army and navy of the country.

The history of the flag of Namibia

In 1878, the territory of the United Kingdom includedmodern Namibia into its Cape Colony and raised their own flag on flagpoles remained for several years. Almost parallel to the German consul ordered the military to raise the flag of their country over certain territories, establishing a protectorate. In 1915, during the Battle Britain pressed the Germans and the troops of the South African Union under her occupied country.
In the future, in what is now Namibiacreated homelands - ethnic territories for living and development of the local tribes. Flag Hereroland homeland, appeared one of the first was in 1970. The tricolor flag, horizontal stripes which are arranged in the order of green, white, black. Golf flag homeland Kavango was bright green and divided horizontally into two equal parts with thin orange, white and blue stripes.
The proclamation of independence in 1990, the state has created a single Namibian flag, which has become an essential symbol of the country.

The capital of Latvia: map, photo. What is the capital city in ...

Holidays in Croatia in July: the prices and ...